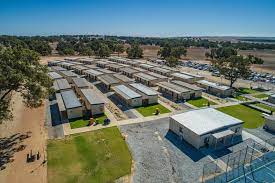 However, other nations are following suit with "quarantine camps" that target unvaccinated travelers and other high-risk individuals. Once in place, these "centers" can be repurposed for any whim of government edicts – and therein lies the great danger. ? TN Editor

Despite some states tentatively beginning to lift lockdown restrictions, Australian authorities are building quarantine camps that won't be completed until next year in order to prepare for "ongoing operations" and to house those "who have not had access to vaccination."

According to ABC Australia, one such 1,000-bed quarantine facility at Wellcamp Airport outside Toowoomba will be fully completed by the end of March 2022.

"At this stage, the cabins will be used by domestic travellers returning from COVID hotspots," states the report.

However, it also makes clear that the camp will be used for "ongoing operations" and will be a source of employment for the local area.

The camps is split into different zones and accommodates singles, doubles, and family rooms while being patrolled by police and security guards 24/7.