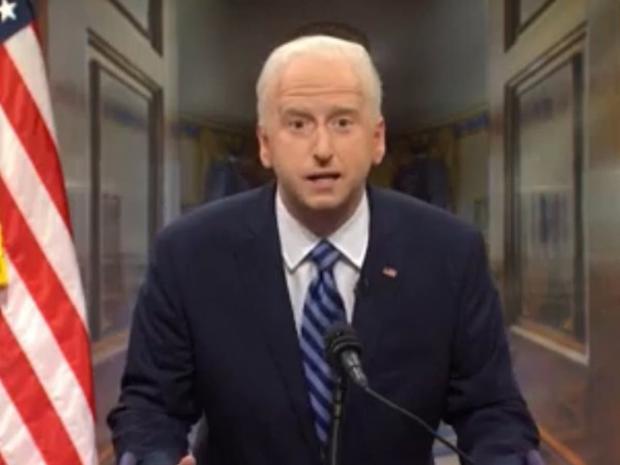 Saturday Night Live brought back three of its former Joe Bidens in the opening skit which mocked his approval rating and mental acuity.

The sketch opened with new cast member James Austin Johnson as the president, who asks for his press secretary, Jen Psaki, to come in.

'Jen Psaki, you're dynamite in those briefings, with your quips and one liners,' Biden tells his press secretary. 'What do you call those zingers?'

'Yeah, I love that,' Biden replies. 'Lay some of that truth on me.'

'Okay,' she replies, 'your CNN town hall was watched by no one,' a reference to a town hall the president took part in on Thursday night, 'and your approval rating is in the dumpster.'

Real Clear Politics polling showed the president was at 10 points behind President Barack Obama's at this point in his presidency. Biden's approval rating currently stands at 43 per cent.

'Yeah, but hey, things are going to turn around, right?' Biden asks in the sketch, to which Psaki replies: 'Um, I'm bad at lying, so I'm going to leave.'

After she leaves, Biden laments: 'I don't understand. People used to like me. The press would call me Uncle Joe. I miss the old me. Where the hell did that guy go?'

At that point, Jason Sudeikis enters the scene, reprising his role as Joe Biden, when he was vice president.

'Wait a second, who are you?' Johnson's Biden asks.

Sudeikis' Biden replies: 'What do you mean who am I, man? I'm you. I'm you from eight years ago, buddy. The ghost of Biden past. Boo!

'How can you be me? You seem so happy, so carefree, so - what's the word I'm looking for?' Johnson's Biden asks, to which Sudeikis' Biden replies: 'lucid'.