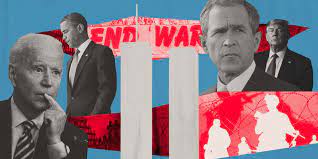 American history neither began nor ended on 9/11. That day's vile events shoved the nation down a darker path than it might otherwise have trod, but just as the attack inflicted on America was the poisoned fruit of past policy crimes and mistakes, the resultant flowering of government surveillance and information cap-ture grew from roots set far deeper than the rubble from the Twin Towers.

Within a month of the assault, a bill called the Uniting and Strengthening America by Providing Appropriate Tools Required to Intercept and Obstruct Terrorism Act, giving the federal government vast new snooping powers, appeared on the floors of the House and the Senate. The USA PATRIOT Act, soon to lose the USA in standard usage, was signed into law by President George W. Bush on October 26, 2001. Voting against it were 66 House members and just one senator: Russ Feingold (D–Wisc.).

Two decades down the line, after a confusing array of follow-on intelligence-gathering laws (including the 2015 USA FREEDOM Act, which supplanted various PATRIOT Act provisions), it is not obvious that America has indeed been "strengthened." The law has been used overwhelmingly to prosecute the war on drugs, not the war on terror, during a time when the country began moving away from prohibitionism. The new tools are error-prone, have not been shown to have prevented terrorism on U.S. soil, and have nonetheless been used as a pretext for successive administrations to construct vast, constitutionally dubious secret surveillance networks.