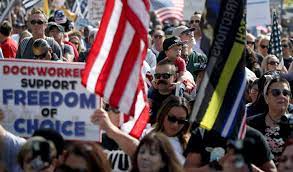 The vaccine requirements for city workers are meant to increase vaccination rates and stave off another deadly COVID-19 surge as the virus continues to circulate and the more-transmissible delta variant spreads.

The group Firefighters 4 Freedom organized the rally, dubbed "A March for Freedom," saying it will be attended by firefighters, police officers, electrical workers, sanitation workers and city government employees.

Aerial video from Sky5 showed a large crowd of people gathered in the area of 200 Main St. around 11 a.m., many carrying "thin blue line" and "thin red line" flags, and signs including ones saying "stop the mandate."

"I'm here to show support for the men and women in law enforcement, the firefighters, those working in sanitation… who are here not so much against being vaccinated, or the vaccine, but they're against being forced to do so by our local government," Castillo explained.

Who Will Save You From This Insane Tyranny? Only You Have the Power to Save Yourself