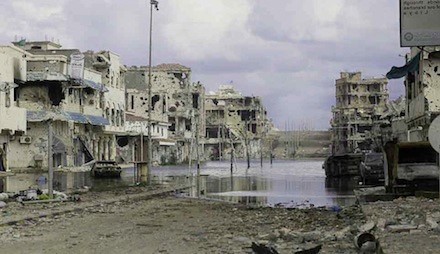 It then wants to believe our side is clean, as any force of righteousness must be. And then at some point it wants to forget about it all absent a few Business Class upgrades for soldiers flying home next week over Thanksgiving. But what happens when the truth, the overriding truth bigger than a single atrocity, peaks out from under the heavy cover of lies?

You may remember America went to war in Syria in 2015 under Barack Obama. What was going to happen next there was a major campaign issue in 2016. The catch-phrase was whether either candidate supported "boots on the ground." Trump, who did not overtly support that, did it anyway, and under now a third president some 900 Americans are still on the ground in Syria on a mission looking for a strategy. It would be surprising if one out of 100 Americans knew today we were still at war in Syria. Don't ask Senator Tim Kaine, Clinton's running mate in 2016. During a recent Senate hearing on Afghanistan, he declared, "I am relieved that for the first time in 20 years, children being born in this country today are not being born into a nation at war." It is doubtful Kaine or more than one out of ten thousand when told of the ongoing fight in Syria could explain why.

So it is surprising to see the New York Times front page an investigation into a more than two year old US air attack in Baghuz, Syria which killed some 80 women and children. Though the entire strike was preserved on drone video, a precise death count is unlikely because the three weapons dropped, totaling over 2,500 pounds of explosives, would have reduced most of the dead to a fine, pink mist. Hard to count that. The amount of explosives used against these undefended human targets in the open was roughly the equivalent of that carried by a B-25 into actual combat during WWII.