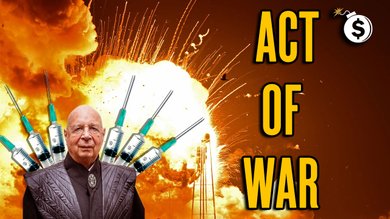 Sounds almost poetic, doesn't it? Almost like 'booster shot'. I mean, health-food shops have told us for years that there is no more quick and refreshing way of getting in those veggies than a juice, or 'wellness' shot?

Booster shots are the perfect innocuous-sounding PR-speak for convincing people to get a third and fourth and nth dose of "vaccine". A boost of immunity. Who wouldn't want that? They might as well brand it in cool green and white with a picture of a happy carrot… A simple solution to being healthy AND keeping the big, bad Covaids away.

The lethal injections haven't yet immunized anyone against anything – except common sense and cojones..

By getting it you have a 1 in 3 chance of getting either a placebo, some sort of flu vax, or the KILL SHOT.

The most jabbed countries are having the worst lockdowns.

The vaxxed also have to test for Covid courtesy of the fearmongering comptrollers.

Almost everywhere, the vaxxed are obligated to don their slavery muzzles – not that they mind, it's an act of pride, because it saaaves liiives.

And with each new and improved symptomless 'mutation', word is that the vax will be 'adapted' – which will result in a clusterfk of new vax mandates. Like the latest, Omicron – which happens to be an anagram for Moronic.

The good news is that the rules of the game dictate they have to tell us what they're planning.

And maybe neither the Covaids mindvirus or the vaxx are killing people fast enough.

So we have already been kindly informed that we can look forward to smallpox, that ancient disease which claims the dubious honor of being the only human disease to have been eradicated by vaccination. Seems not! Roll up your sleeves and prepare to be injected by the smallpox vaccine which contains live vaccinia virus.

Oh and Marburg's virus disease – family of Ebola and just as deadly.

Survive those and you may be deemed worthy of becoming a transhuman robot working in a space factory.

It is an Act of Fear, preceded by an Act of Communication, leading to an Act of War. And it's all a game.

More of that in today's Gibberish With Lucy & Jeff.
As well as footage of my one-day birthday celebration, complete with mariachis and a family smash-Jeff's-face-in-the-cake – you don't want to miss it.