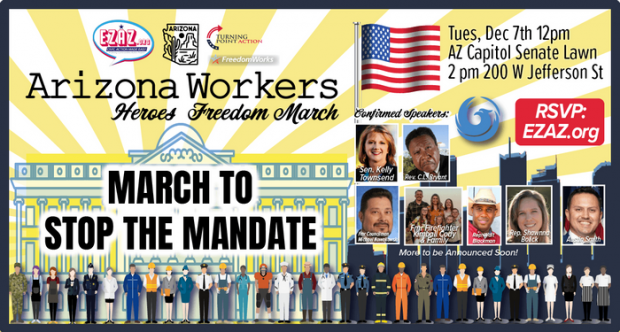 EVENT DETAILS (times subject to change): Noon - Meet at the Arizona Capitol in Downtown Phoenix at 1700 W Washington St. 12:30 pm - Press Conference by the rose garden with Arizona workers & elected officials. 1 pm - Rally for Workers & Freedom 1:30 pm - March to the Phoenix City Hall at 200 West Washington Street. This is a 30-minute walk. Bring your walking shoes, water, & sunscreen. 2:30 pm - Phoenix City Council meeting. This building is just south of Phoenix City Hall across the street towards Jefferson Street. The meeting is expected to go on until at least 5 pm. Sometimes meetings go until 8 pm. We plan to stay until the vote on the mandate is completed. You can sign up for public comment at EZAZ.org. You may want to bring lawn chairs to have at the City Council meeting.

Vaccine mandates and the tools to implement them are coming fast and furious at us!

On Wednesday, Congress voted to approve funding for a federal vaccine database to collect patient-specific information. In addition to Arizona Democrats, representatives that voted for this funding include Republicans Debbie Lesko and David Schweikert.

Today, the City of Phoenix announced a vote by the City Council on a vaccine mandate for all employees in conjunction with Biden's Federal Contractor mandate, even though all Federal mandates have been put on hold with the courts.

City employees are not going to roll over on this and they are taking a stand for medical freedom! Nearly 1,000 employees including police, firefighters, streets, water, and trash workers have organized for a day of action starting at the Arizona Capitol with a meeting with the Legislature and THEY NEED YOUR HELP!

Public safety in our City is in crisis. We don't even have enough officers to respond to 911 calls and our fire department is close to being in the same position. With this mandate, we are at risk of losing 60-80% of public safety workers and 30% of infrastructure employees.

The other cities and counties in Arizona are just waiting for Phoenix to go through with it before they act on a mandate too! That's why firefighters from all over the state are joining this event to stand against the mandate for all employees in Arizona and across the nation!

We must put public safety + individual liberty first in Arizona!

It's time for the public to join with our public officials for a Statewide Call to Action!

At 12 pm we are asking the public statewide to join us at the Capitol for a very important press conference and announcement to begin at 12:30 pm. This will be followed by a rally and a march from the Arizona Capitol to Phoenix City Hall. The details of the event are in the RSVP link below.

We would like to give a HUGE THANK YOU to Senator Kelly Townsend for arranging this meeting at the Capitol so employees all over the state facing mandates can be heard by their Legislature!

TO STOP THE MANDATES TAKE THE FOLLOWING TWO ACTIONS:

1 - RSVP for the Press Conference, Rally, and march HERE.