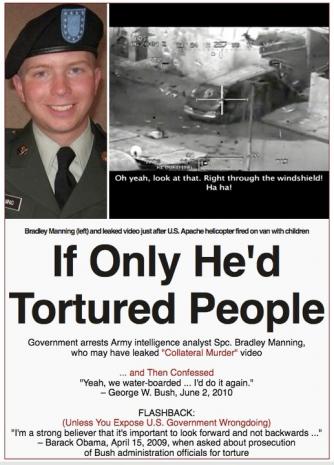 MSNBC's Dylan Ratigan hosted a segment on the extreme, prolonged isolation in which Bradley Manning has been kept for eight months now, despite having been convicted of nothing.   He had on his panel a "Democratic strategist," a "Republican strategist," and "a Washington insider."  Ratigan tried without any success to get them to understand why putting someone in a cage alone for 23 hours a day under extremely repressive conditions was unjust and intolerable.

IT'S NOT A LIE IF YOU BELIEVE IT

Prostitutes of the Press