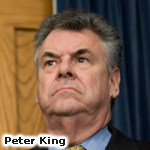 Rep. Peter King introduces anti-WikiLeaks legislation ... The bill, known as the SHIELD Act, would amend the Espionage Act to make publishing classified information "concerning the identity of a classified source or informant of an element of the intelligence community" an act of espionage. Sens. John Ensign (R-NV), Joe Lieberman (I-CT) and Scott Brown (R-MA) introduced similar legislation in the Senate last week. "These organizations are a clear and present danger to the national security of the United States," Rep. King continued. "Julian Assange and his compatriots are enemies of the US and should be prosecuted under the Espionage Act. This legislation provides the Attorney General with additional authority to do just that." – Raw Story