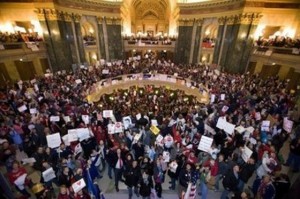 But: 'That would not be something I recognize as the United States of America,' state patrol inspector adds

Amid the largest protests Madison, Wisconsin has seen in decades, newly elected Republican Gov. Scott Walker last week issued a stark message to public labor unions occupying the capitol building: we have options, and using the National Guard against protesters is among them.

Since then, a myrad of rumors have circulated through crowds gathered at the state capitol, united in protest of a bill that would strip public unions of their collective bargaining rights. One rumor, which had not yet come to pass, even suggested that like Egypt's former dictator did in Tahrir Square, Gov. Walker may call in police to forcibly clear out the capitol.

Layoffs? You Want To Talk About Layoffs?

Forget the Zombie Apocalypse - Can YOU Survive the Coming Layoff Wave?

Get Woke, Go Broke: Disney To Lay Off Employees After Billions In Operating Losses

Get Woke, Go Broke: Disney To Lay Off Employees After Billions In Operating Losses