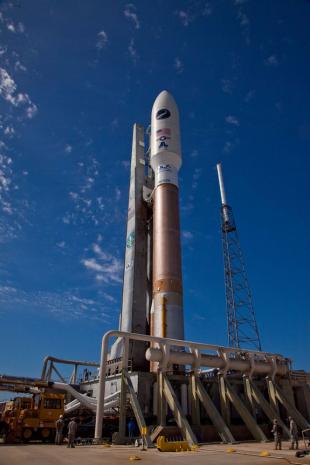 The U.S. Air Force is poised to launch its second robotic X-37B space plane on a secret mission today (March 4), with some experts speculating that the classified flight will test new spy satellite technologies.

The robotic X-37B mini-shuttle is slated to blast off today atop an Atlas 5 rocket from the Cape Canaveral Air Force Station in Florida on the second flight for the Air Force Rapid Capabilities Office's X-37B program. The launch time is set for 3:50 p.m. EST (2050 GMT), though a dismal forecast predicts a 70 percent chance of foul weather.

The launch comes on the same day as another rocket failed after lifting off from California's Vandenburg Air Force Base (VAFB). An Orbital Sciences Taurus XL booster carrying NASA's new Glory climate satellite failed to get the payload to orbit when the rocket's nose cone did not separate on time. United Launch Alliance, which built the Atlas 5 rocket slated to liftoff with X-37B, said that that rocket's failure would not affect their operations.