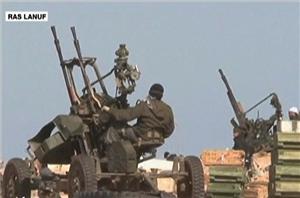 Rebels will not pursue Libyan leader Muammar Gaddafi over crimes they say he has committed if he steps down from his post in the next 72 hours, the head of the rebel National Libyan Council has told Al Jazeera.

"If he leaves Libya immediately, during 72 hours, and stops the bombardment, we as Libyans will step back from pursuing him for crimes," Mustafa Abdel Jalil, head of the opposition National Council, told Al Jazeera on Tuesday.

He said the deadline would not be extended beyond 72 hours.

"Based on our love for our country we have proposed to the [Gaddafi's] indirect negotiators that a solution can be reached," Jalil told Al Jazeera.

"Conditions are that firstly he stops all combat in the fields, secondly that his departure is within 72 hours; thirdly we may waive our right of domestic prosecution ... for the crimes of oppression, persecution, starvation and massacres.

"We will have to wait and see what the regime's response is."
Watch Video