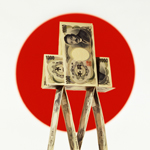 The Bank of Japan, which holds a policy meeting on Monday, injected 7 trillion yen into the money market via a same-day operation. It later injected an additional 5 trillion yen in same-day funds and a BOJ official said the central bank will closely monitor the currency market in deciding the need for further market operations. – Nagoya

Dominant Social Theme: It will be OK. The Japanese are industrious.

Free-Market Analysis: Demographically, the Japanese population has continued to age at a substantial rate, aggravating many of the problems that the Japanese economic infrastructure already faces. This is actually the best evidence we have of the dysfunction of Japanese society; demography doesn't lie. The Japanese system is dysfunctional and discouraging population growth.