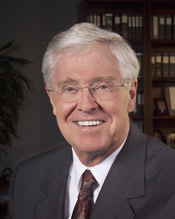 By STEPHEN MOORE (Mr. Moore is a member of The Wall Street Journal's editorial board.)

But you've probably never heard of it.

Neither Charles Koch nor his firm are household names. Mr. Koch (pronounced "coke") has managed to live in relative obscurity despite being one of the richest men on the planet, with a net worth estimated at $14 billion. He is a man of modesty who craves none of the fame or public adulation that seems to preoccupy other members of the billionaires' club.

Yet celebrity seems to intrude. On the day I visit the company's Kansas headquarters, his office is atwitter over a recent issue of Forbes magazine featuring the world's billionaires. The issue includes a glossy photo of Charles Koch smiling contentedly, and right below him on the page is a picture of a slightly better known titan: Oprah. Running in company like that is bound to bump up Mr. Koch's public profile -- whether he likes it or not.

My mission, then, is to unwrap at least a few of the secrets of his success.

Back in 1967, when Mr. Koch was in his early 30s, he became the reluctant president of the family business, then a $177 million, medium-sized oil firm. He recalls: "My father threatened that he was going to sell the company if I wouldn't come back home to Kansas from the East Coast and run it."

Nearly four decades later, that family company is a global conglomerate with net annual sales that exceed the GDP of many small nations, and it includes a diverse range of businesses supplying everything from jet fuel to plastic, asphalt to beef, toilet paper to lumber. It owns many familiar brand names such as Dixie cups, Stainmaster carpet and Brawny paper towels. The firm's financial performance numbers have been positively gaudy, with a rate of return on investment that has outpaced the Standard & Poor's 500 at least tenfold under Mr. Koch's stewardship.

"We couldn't have achieved the profitability we have," Mr. Koch insists, "if we had been a public company. No investor would have been patient enough to allow us to build a firm oriented toward long-term growth and profits." This is one of Mr. Koch's bugaboos regarding the deficiencies of modern corporate management. He notes, "The short-term infatuation with quarterly earnings on Wall Street restricts the earnings potential of Fortune 500 publicly traded firms. Public firms are also feeding grounds for lawyers and lawsuits."

He then confidently predicts: "Regulatory laws like Sarbanes-Oxley will only increase the earnings advantages of private firms. I would suspect that there will be more of these private company takeovers of publicly traded companies." He's referring to his blockbuster $21 billion purchase of Georgia Pacific last November, a Fortune 500 forest and paper company.

If Mr. Koch is right about the re-emergence of private corporate structures, it is a very big deal for the near-term future of financial markets. The hyperactive trend of the past decade to take companies public may be shifting into reverse gear. The Georgia Pacific deal, which was the largest acquisition of a publicly traded company by a private firm in U.S. history, would seem to confirm Mr. Koch's thesis. "Since the Georgia Pacific purchase," he tells me, "other publicly traded companies have come calling, asking whether we would be interested in taking them private, too."

This creative forward-thinking should come as no surprise, because Mr. Koch is immersed in the ideas of liberty and free markets. Whereas the bookshelves of most of America's leading CEOs are stocked with pop corporate management and "how to succeed" books, Mr. Koch's office is a wall-to-wall shrine to writings in classical economics, or, as he calls it, "the science of liberty." The authors who have had the most profound influence on his own political philosophy include F.A. Hayek, Ludwig von Mises, Joseph Schumpeter, Julian Simon, Paul Johnson and Charles Murray. Mr. Koch says that he experienced an intellectual epiphany in the early 1960s, when he attended a conference on free-market capitalism hosted by the late, great Leonard Reed.

Mr. Koch is by training a scientist, with master's degrees from MIT in nuclear and chemical engineering. Despite his business success, he has no MBA or formal management training. Mr. Koch sees that as an advantage. "Being an engineer, I realized there's an objective reality that helps one understand the rules and conditions that improve the human condition," he says. "Laws and principles that facilitate the advancement of peace, prosperity and social progress are as immutable as the laws that work in science. . . . Politicians often come up with misguided policy solutions," he continues, "because they suffer from Hayek's 'fatal conceit' and believe they can violate basic laws of economics. They are just as misguided as the man who jumps out the 14th floor of a building convinced that he can repeal the law of gravity."

As we continue, Mr. Koch becomes increasingly animated. He discusses another seminal work in his collection, F.A. Harper's 1957 "Why Wages Rise." The book demonstrates "that wages rise not because of unions or government action, but because of marginal productivity gains -- people get more money when they produce more value for other people." Then he confides, "I was so thrilled by this revelation that I had what Maslow called a 'peak experience.'"

Ideas seem to exhilarate him. This no doubt explains in part why this professorial CEO delivers "dozens and dozens" of lectures around the country to his employees on these very topics. But what does any of this have to do with explaining his company's prodigious profitability? Well, everything -- he believes. Mr. Koch contends that the key insight of his business career was melding these philosophical insights about the way the wealth-creation process works into a business operating system called "Market Based Management." This system, which he has trademarked, enables every division of his business empire to operate as a separate, autonomous, profit-maximizing unit. It is intended to reward employees who think like entrepreneurs.

"Long-term success entails constantly discovering new ways to create value for customers and building new capabilities to capture new opportunities," he instructs. "In this sense, maintaining a business is, in reality, liquidating a business." Mr. Koch likens the cycle to Schumpeter's "creative destruction" -- where the old and inefficient are ruthlessly swept away by the new.

What we have here are the theories of supply-side economics operating on the micro-level of the firm. Incentives matter; competition fosters innovation; property rights must be firmly established. Koch Industries gives big financial bonuses for entrepreneurial behavior by employees, whether it's a project head or a janitor. The idea is to reward all activities that add to the bottom-line profitability of the firm. "We want our employees to act like owners," Mr. Koch explains. Similarly, employees earn "decision rights" for past successes. "Just as central planning is a failure in running government, so it is at the level of the firm," he says, repeating one of his favorite operating tenets.

Some of the ideas that undergird Market Based Management seem fairly commonsensical to me, and I'm not entirely sold on the notion that this program somehow represents a seismic breakaway from what is taught at Harvard Business School. Some former employees also complain that top management's absolutist devotion to MBM has created a cult-like atmosphere that can be overbearing. To succeed at the company, they say, one has to become a "Koch addict" -- which means, in part, buying into MBM. Mr. Koch himself willingly concedes that the ideas don't bear fruit with everyone, and that many times employees simply "memorize and regurgitate the ideas," rather than apply them on the job. But even the deepest skeptic can't argue with the bottom-line results. Quite simply, Mr. Koch's firm has tripled in size and profitability in the last decade, among its many other achievements.

Charles Koch -- no surprise -- disdains government and the political class. He has invested tens of millions of dollars into free-market think-tanks and political activist groups (including several founded by this author). He's disgusted with the runaway federal budget under the Republicans, and he proposes that "every new law should be subject to the question: Will it strengthen the culture of prosperity?" Won't about 90% of the laws fail that test? "Yes, that's exactly what I mean," he replies. "But the problem isn't the people in government, it's the system -- the incentives are perverse."

Mr. Koch's latest crusade to spread the ideas of liberty has been his sponsorship of a twice-yearly conference that gathers together many of the most successful American entrepreneurs, from T. Boone Pickens to former Circuit City CEO Rick Sharp. The objective is to encourage these captains of industry to help fund free-market groups devoted to protecting the fragile infrastructure of liberty. That task seems especially critical given that so many of the global superrich, like George Soros and Warren Buffett, finance institutions that undermine the very system of capitalism that made their success possible. Isn't this just the usual rich liberal guilt, I ask. "No," he says, "I think they simply haven't been sufficiently exposed to the ideas of liberty."

Sounds as though Messrs. Soros and Buffett would benefit more from sitting down with Charles Koch than I would. For my part, after listening to this natural-born teacher exalt the superiority of free markets and the boundless wealth that they can create, I feel as though I'm about to experience one of Maslow's "peak experiences" myself. But our time is up, and if Mr. Koch has learned nothing else from his spiritual mentors, it's the concept of opportunity cost. Time is money, and it's time to get back to his greatest passion of all: building the profitability of his world-class company.

Mr. Moore is a member of The Wall Street Journal's editorial board.

Following in the footsteps of their father, a member of the John Birch Society, the Kochs clearly have a conservative bent. Charles Koch founded the Cato Institute, and David Koch co-founded Citizens for a Sound Economy (CSE) [now FreedomWorks], where he serves as chairman of the board of directors. David also serves on the board of the Cato Institute. The Koch foundations make substantial annual contributions to these organizations (more than $12 million to each between 1985 and 2002) as well as to other influential conservative think tanks, advocacy groups, media organizations, academic institutes and legal organizations, thus participating in every level of the policy process. Their total conservative policy giving exceeded $20 million between 1999 and 2001. As reflected in their creation and funding of Cato and CSE, most of their contributions go to support organizations and groups advancing libertarian theory, privatization, entrepreneurship and free enterprise. David Koch even ran for president as the Libertarian Party candidate in 1980. In describing his foundation's contributions, he states, "My overall concept is to minimize the role of government and to maximize the role of private economy and to maximize personal freedoms."