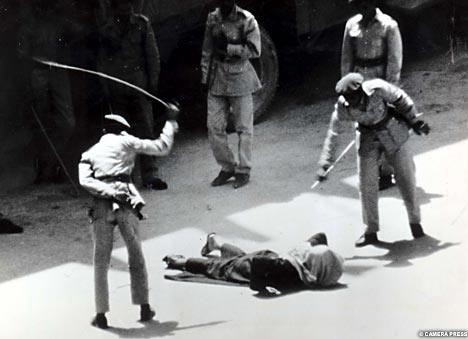 • denial of fair and public trials and lack of due process in the judicial system;

• restrictions on civil liberties such as freedom of speech (including the Internet);

• assembly, association, movement, and severe restrictions on religious freedom; and

• corruption and lack of transparency."

Also mentioned were inequality and violence against women, human trafficking, no labor rights, discrimination on the basis of gender, religion, sect and ethnicity, and violations of children's rights.

In early December, Amnesty International (AI) published a report on the kingdom titled, "Saudi Arabia: Repression in the Name of Security."

"I am here to say we need democracy. We need freedom. We need to speak freely. We need no one to stop us from expressing our opinions."

Shortly afterward he was arrested and charged with "communicating with the foreign media." He's now held incommunicado in Saudi's notoriously repressive prison system.

On March 5, Press TV reported the arrest and detention of senior Saudi cleric Sheikh Tawfiq al-Amer. At issue was his call for constitutional monarchal rule.

A more recent high-profile case involved 16 men, including nine prominent reformists. They were sentenced to up to 30 years for allegedly trying to seize power by financing terrorism with laundered money. Their charges and trial had no legitimacy whatever. They were victimized for advocating political change and human rights.

AI said Saudi authorities "launched a new wave of repression in the name of security." Human rights protesters have been brutally oppressed. At the same time, a new anti-terror law exacerbates the absence of civil and human rights.

Last June, AI got a leaked copy. Provisions in it include:

• prosecuting peaceful dissent as terrorism and "harming the reputation of the state or its position;"

• a minimum of 10 years imprisonment for anyone questioning the integrity of the king or crown prince;

• authorities will have carte blanche power to detain alleged security suspects indefinitely without charge or trial; and

• terrorism's definition is expanded to include endangering "national unity" and/or questioning the integrity of the king or regime.

Overall, abusive practices will be legalized, including an anything goes policy of crushing dissent.

Thirteen provinces comprise the kingdom. The ruling monarch appoints their governors. They're either princes or close royal family relatives. In 1993, ministers became subject to four-year term limitations. In 1997, a Consultative Council was expanded from 60 to 90 members.

Legislation is by Council of Ministers resolution, subject to royal approval. Democracy is a dirty word. Saudi's 27 million residents have no rights whatever. The media are severely constrained. Anyone dissenting is subject to arbitrary arrest and detention, including political critics, bloggers, academics, foreign nationals, and others.

On September 25, King Abdullah said women, beginning in 2015, will be allowed to run in municipal elections, and be appointed to the Shura Council monarchal advisory body.

Rage Bubbling Up Against the Regime

In response, severe crackdowns followed. Hundreds of peaceful protesters were arrested and detained without trial. Others were charged with "vague security-related and other offenses. (AI) considers many of (them) prisoners of conscience, held solely for peacefully expressing their rights to freedom of expression and assembly."

In recent years, thousands have been detained on security grounds and remain imprisoned under horrific conditions. Victims include clerics, alleged Al Qaeda members, anyone with alleged connections or sympathies, and others suspected of anti-regime sentiment or its ties to Washington and other Western states.

Everyone arrested for security reasons faces torture and other forms of abuse. It's commonplace "because interrogators know that they can commit their crimes without fear of punishment."

Abuse is also encouraged by the "ready acceptance by courts of 'confessions' forced (from) detainees (by) beatings, electric shocks, and other forms of torture and ill-treatment."

Many detainees are untried. Others brought to court face grossly unfair proceedings, including secret ones with no right of appeal. Since established in October 2008, Saudi's Specialized Criminal Court hears them.

Victims are mostly human rights defenders, political reform activists, members of religious minorities, and many others guilty of no internationally recognized offense.

"Peaceful protesters and supporters of political reform in the country have been targeted for arrest in an attempt to stamp out the kinds of call for reform that have echoed across the region."

Many arrested are charged with "disrupting order." Some are forced to sign pledges to never again protest. In addition, they're forbidden to travel. Others face secret kangaroo proceedings. Those affected are guilty by accusation.

Washington has close ties to despotic regional regimes, including Saudi Arabia. It uses them advantageously to advance its Greater Middle East project for unchallenged dominance.

Wars are waged to replace independent regimes with client ones. Saudi and other regional governments rule despotically. They're also US proxies when called on, including against Gaddafi's Libya, Bahrain, Yemen, Syria.

As a result, they're rewarded for partnering with Washington's worst crimes. Who said it didn't pay!

Hurray. For once Lendman pumped out an article with some truth in it, about the horrible Saudi regime where pure Sharia has been enacted, making it a hellhole and world eyesore. Maybe he doesn't receive Saudi funding, but instead Iranian funding :)  With the Muslim World one never knows who's the Taco Bell dog.

The U.S. has owed it to the world from the day that they got the a-bomb to use it on Mecca and Medina in order to take the wind out of the sails of the diehard Allah Akbars, who may finally realize that Allah is a dead god and drop their jihad. Instead, becaue of oil it kowtows to the Saudi monarchy, allowing all of the horrors of global jihad to go on, 9/11 included, not to mention the repression of the Saudi people. Now it's selling the Saudis billions worth of advanced weapons to fight Iran and the Shiites, who seem to be the main threat to it.  If Iran took over Arabia, al-Qaida would move in and set up shop, and with Iraq absorbed, a combined Iran-Iraq-Saudi army could move straight toward Israel while cutting off U.S. oil, not a good scenario. If the U.S. invaded Arabia, the entire Muslim World might rise in jihad against desecration of their holy land, etc.  Still, nuking Mecca and Medina in advance might be like what happened to the Wicked Witch of the West when Dorothy poured water on her, namely, the whole diehard Muslim mindset might melt away to the cheers of the crowds in the streets, who begin partying to rock and roll. The U.S. could deny that it did it, and blame Russia or even Pakistan for funners, if the CIA is that smart :)

It's all in my Winslow Plan for Ending Islam Forever:  http://go.to/winslowplan