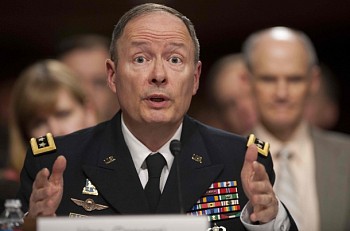 He does both globally. He's a serial lawbreaker. He violates fundamental constitutional law. He testified before Congress. More on that below.

Edward Joseph Snowden revealed what vital to know. He exposed unconstitutional spying. He said more. He accused NSA of lawless hacking. He knows. He was there. He revealed what he saw firsthand.

He's currently in Hong Kong. He's a wanted man. Washington wants him extradited, arrested, prosecuted, disappeared or murdered. He fears for his safety.

According to the Chinese daily Global Times:

"The US is accumulating all the advanced powers of the Internet to forge a state-level 'fist' in order to launch cyber attacks on other countries."

"The unparalleled power of this 'fist' is beyond our imagination, which should be an alarm bell for us to catch up with the development of the internet."

Records show specific NSA-hacked Hong Kong and mainland dates and IP addresses over a four year period. According to Snowden:

"The primary issue of public importance to Hong Kong and mainland China should be that the NSA is illegally seizing the communications of tens of millions of individuals without any individualised suspicion of wrongdoing."

"They simply steal everything so they can search for any topics of interest."

"Classified US government data shown to the South China Morning Post by whistle-blower Edward Snowden has provided a rare insight into the effectiveness of Washington's top-secret global cyberspying programme."

"New details about the data can be revealed by the Post after further analysis of information Snowden divulged during an exclusive interview on Wednesday in which the former CIA computer analyst exposed extensive hacking by the US in Hong Kong and the mainland."

He "didn't elaborate on the attacks that were stopped, other than to tie them to two well-known foiled 2009 plots." More on them below. No such plots existed. They were invented. Innocent victims were falsely accused.

No verifiable evidence shows any plots were foiled on Alexander's watch. He's been NSA chief since August 1, 2005. His claims don't wash.

He committed perjury. He's guilty on multiple counts. Don't expect recrimination against him. Key Senate members are fully briefed. They're complicit in state crimes. So are many other congressional members.

No evidence whatever supported government accusations. Zazi got no bomb-making instructions. He planned no crimes. His so-called ingredients included hydrogen peroxide, acetone and hydrochloric acid.

He bought them at a beauty shop. He did so legally. Anyone can buy the same things. Hydrogen peroxide's a common bleaching agent. It's a mild disinfectant.

Acetone's an inflammable organic solvent. It's used in nail polish remover, plastics and for cleaning purposes.

No legitimate evidence surfaced. None was presented. Innocence is no defense. Zazi was declared guilty by accusation.

According to Justice Department officials, Healy was guilty of "a dozen federal terrorism crimes relating to his role in planning the November 2008 terrorist attacks in Mumbai, India, and a subsequent proposed attack on a newspaper in Denmark."

No verifiable evidence links him to any crimes. CIA, Mossad, India's Research Analysis Wing (RAW, and perhaps Pakistan's ISI were behind twelve coordinated shooting and bombing Mumbai attacks. They were false flags.

DOJ officials fabricated charges against Healy and others. He's innocent but guilty as charged. Thousands of political prisoners rot in America's gulag.

Media scoundrels pronounce guilt before trial. They do so in the court of public opinion. They support the worst state crimes. They violate core journalistic ethics. They it unapologetically. They betray their readers, viewers and listeners in the process.

Post-9/11, dozens of Muslims were falsely convicted of terrorism and/or conspiracy to commit it.

It was more show-and-tell than holding Alexander accountable. Congress is fully briefed on what's ongoing. Key members know the worst of it. Permitting it makes them complicit.

FBI Director Robert Mueller lied like Alexander. In testimony before House Judiciary Committee members, he claimed spying could have foiled 9/11. It will prevent "another Boston," he said.

Mueller claims watering down spying leaves America vulnerable. "If you narrow (the scope of surveillance), you narrow the dots and that might be the dot that prevents the next Boston," he said.

America has no enemies except ones it invents. Mueller lied to Congress. He committed perjury like Alexander. He remains unaccountable.

He's stepping down in September. Perhaps he'll accept a high-paying private sector job. Most exiting US officials do so.

Thermonuclear war is possible. All bets are off if it happens. Imagine a worst case scenario. Imagine not going all out to prevent it.

1 Comments in Response to NSA Chief Lies to Congress

So what? Congress is one of Americas biggest enemies competing only with Ignorant Americans.