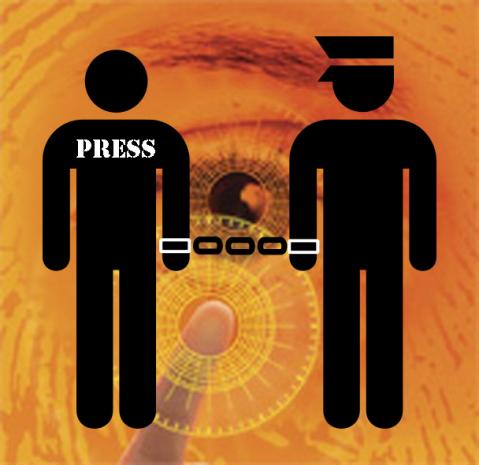 First Amendment rights matter most. Without them all other freedoms are at risk. Post-9/11 policies threaten them.

Bush waged war against them. Obama escalated it. He promised transparency, accountability and reform. He called whistleblowing "acts of courage and patriotism." He said one thing. He did another.

Journalists say he's waging war on dissent. He exceeds the worst of George Bush. He's heading America on a fast track to tyranny.

He wants information people have a right to know suppressed. He evades press scrutiny. He aggressively targets leakers.

Anyone suspected of disclosing information he wants concealed is vulnerable. Press freedom is gravely threatened.

On February 12, a CPJ press release headlined "Attacks on the Press: CPJ to launch annual global assessment of press freedom."

It named three key threats. They include digital surveillance, murdering journalists, and pressuring them to suppress what governments don't want revealed.

Out-of-control NSA spying harms everyone. It's driving a stake in the heart of press freedom. It's compromised gravely in America.

CPJ first published "Attacks on the Press" in 1986. This year's edition features a chapter titled "The NSA Puts Journalists Under a Cloud of Suspicion."

Virtually everything digital can be monitored. NSA "recreate(s) a reporter's research." It retraces sources' movements.

It follows current and past communications. It uncovers confidential sources. It does so with technological ease.

"It provides a deep breeding ground for artificial intelligence systems, which may in the future lead to more efficient, even predictive, spying machines," said CPJ.

Washington and other governments will spot what they most wish to know. Perhaps they'll do it in advance.

Imagine the potential ability to discover things before they happen. Unless checked, out-of-control spying may destroy press freedom entirely. Maybe all freedoms.

Perhaps what's ongoing now is prelude to much worse. CPJ interviewed William Binney. America is "a police state," he said. Mass spying is "a totalitarian process."

NSA monitors all journalists. It maintains "a record of all of them so (it) can investigate, so (it) can look at who they'll calling - who are the potential sources that they're involved  in, what probable stories they're working on, and things like that."

"(A)ll reporters should be worried," he believes. Different things affect them.

"Reporters who work for the largest media organizations should be worried probably primarily because their sources will dry up as (they) recognize that there is no way to cover their trail."

Independent journalists may be targeted. They're vulnerable on their own. They lack "institutional protections" MSM reporters get.

"NSA is focused on discovering and developing intelligence about valid foreign intelligence targets in order to protect the nation and its interests from threats such as terrorism and the proliferation of weapons of mass destruction."

It bears repeating what other articles explained. America's only threats are ones it invents.

Obama lied saying "US intelligence agencies (are) anchored in a system of checks and balances - with oversight from elected leaders, and protections for ordinary citizens."

He lied claiming mass surveillance "prevented multiple attacks and saved lives - not just here in the United States, but around the globe."

He lied saying federal courts and congressional oversight curbed "some of the worst excesses that emerged after 9/11..."

He lied saying he ordered "increased oversight and auditing, including new structures aimed at compliance."

He lied claiming nothing he's seen "indicate(s) that our intelligence community has sought to violate the law or is cavalier about the civil liberties of (American) citizens."

He lied saying "the men and women of the intelligence community, including the NSA, consistently follow protocols designed to protect the privacy of ordinary people."

He lied claiming "(t)hey're not abusing authority in order to listen to your private phone calls or read your emails."

He lied saying "(w)hen mistakes are made...they correct" them.

He lied saying "our intelligence community follows the law."

He lied claiming terrorist threats "are not going away any time soon. They are going to continue to be a major problem."

Senator Ron Wyden asked him: "Does the NSA collect any type of data at all on millions or hundreds of millions of Americans?"

Earlier he accused NSA of unconstitutionally wiretapping US citizens, saying:

"Everyone at NSA knew what they were doing was illegal, because it's drilled into our heads over and over that it's against NSA policy, that you do not do that. The choice is to speak out and get fired."

Former army intelligence Sgt. Adrienne Kinne said she monitored phone conversations between journalists in Iraq and their spouses and editors.

He exposed lawless spying. He connected important dots for millions. He told people what they need to know.

He's outrageously charged under the 1917 Espionage Act. It's a WW I relic. It has no relevancy today.

Obama uses against whistleblowers. He targeted more than all his predecessors combined.

• Willful Communication of Classified Intelligence Information to an Unauthorized Person."

Bradley (Chelsea) Manning was prosecuted for revealing serious war crimes. He got 35 years in prison for acting responsibly.

"I think it's wrong that newspaper reporters have all these documents, 50,000 or whatever they have, and are selling them and giving them out as these - you know it just doesn't make sense," he said.

"(T)hat's more (for) the courts and the policy makers, but from my perspective it's wrong, and to allow this to go on is wrong."

Most journalists may not end up in NSA's crosshairs, said CPJ. All journalists need to know they're monitored. They're vulnerable if writing about affairs of state and related issues.

It's impossible to know everything NSA collects, said CPJ. It's enough to give everyone pause.

"The result would be details of what he did: where he went, who he talked to, what he looked at, what he purchased - how he spent his day," said Schneier.

This gravely compromises investigative journalism. If government "see(s) all the numbers you're calling, they're able to tell pretty much what kind of story you're working on, even without getting (its) content..."

"They're able to tell what the nature of the story is, (and names of) sources you're dealing with."

Binney said NSA didn't build its sophisticated Utah facility for transactional data alone. It's for collecting and storing "content of communications, not just metadata," he stressed.

"They are building more and more storage because they're collecting" vast amounts of data.

They "take everything" off communication lines "and store it." Information is "indexed to the graph of lives and social networks."

Unless checked, imagine how much more it'll have ahead. "(T)he more data you get, the more capacity you have to see into somebody,'s life," said Binney.

Technological advances let NSA spy in unprecedented ways. Journalists have to rethink how they communicate with sources.

"At the same time, (it's) deceiving the very weak organizations that are supposed to be the oversight mechanisms - the Congress and the FISA Court."

"I think it's a very worrying situation, not just for journalists, but for anybody."

Over 100 years ago, former Supreme Court Justice Louis Brandeis called sunlight "the best of disinfectants." He couldn't imagine how badly it's needed now.

The Electronic Freedom Foundation (EFF) called February 11 "The Day We Fight Back."

It joined "thousands of websites in protesting (against) mass (NSA) surveillance…" It used its web site "as a platform for users to speak out against spying abuses..."

Protests were held in cities worldwide. People fought back for freedoms too important to lose.

On February 12, EFF asked "How Big Was the Day We (Fought) Back?" It showed a visual image of Michigan Stadium filled to capacity. It holds 109,901 people.

Imagine two MSs filled to capacity, said EFF. Imagine everyone in them "doing the same thing at the same time - contacting Congress and demanding an end to mass surveillance."

You'd be thousands short of nearly 250,000 Americans doing it. They called. They emailed. They demanded Congress support their rights.

Another 200,000 + participated in organized actions worldwide.

At peak times, congressional members were bombarded with over 7,000 calls an hour. EFF stressed what it said before.

Hundreds of thousands of people speaking out is "amazing," it added. "We're proud to have taken part" in what's so important.

EFF expressed gratitude to "many, many" other participants. Freedom isn't something handed out without struggle.

Getting rights requires fighting for them. The same holds for keeping them. Key is not letting energy wane.