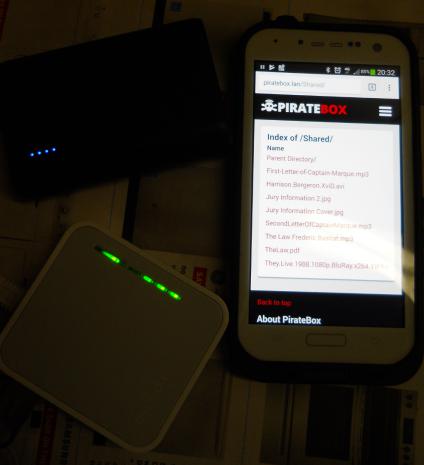 The new Hotfix release 1.1.3 is out. This release contains RPi-Zero-W support, additional changes for reduce write cycles on the SDCard and some other improvements. Download the image today and discover PirateBox!

Register for PirateBox Camp 2015! (This was several years ago, but am including it in this post so you will know this camp took place)...

Our free registration for PirateBox Camp 2015 in Berlin, Germany (July 18-19) is now open! You can register by sending a quick email to camp[at]piratebox.cc And you can learn more about PirateBox Camp here!

The PirateBox has been named by InfoWorld as one of the top picks of the year among open source tools for operating and securing networks.

PirateBox is a DIY anonymous offline file-sharing and communications system built with free software and inexpensive off-the-shelf hardware. Learn more below by reading our FAQs or start building one now.

What is the PirateBox?

PirateBox creates offline wireless networks designed for anonymous file sharing, chatting, message boarding, and media streaming. You can think of it as your very own portable offline Internet in a box!

How does it work?

When users join the PirateBox wireless network and open a web browser, they are automatically redirected to the PirateBox welcome page. Users can anonymously chat, post images or comments on the bulletin board, watch or listen to streaming media, or upload and download files inside their web browser.

Where can I buy a PirateBox?

There are some things that money can't buy, and PirateBox is one of them! However, you can build one yourself by following our easy DIY instructions (OpenWrt instructions) OR (Raspberry Pi instructions) .

Is it hard to build my own PirateBox?

With the release of PirateBox 1.0, building your own PirateBox has never been easier!

There is also now a PirateBox Android app which can be easily installed on rooted Android phones.

PirateBox will also run on most wireless routers that have USB storage and that are capable of running OpenWrt. It is even possible to install PirateBox directly on a Laptop running Linux. The build process is more advanced than using our target hardware above and your mileage may vary.

PirateBox is designed to be private and secure. No logins are required and no user data is logged. Users remain anonymous – the system is purposely not connected to the Internet in order to subvert tracking and preserve user privacy.

PirateBox 1.0 brings several new features including: Responsive web design for ease of use with phones and tablets; UPnP Media Server for local streaming of movies and songs; Image and Message Board for 4chan-like functionality; Chat room for anonymous communications; Browser-based file sharing system! You can learn more about PirateBox Version 1.0 here.

Can I modify my PirateBox?

Absolutely! PirateBox is free (as in freedom) because it is registered under the GNU GPLv3. This license grants you the right to freely copy, distribute, and transform creative works according to the principles of copyleft. You can learn more about modding your PirateBox by visiting the mods page and the PirateBox Forum.

Where can I read more about the PirateBox?

Visit the PirateBox Press page for a listing of and links to more than 175 stories about PirateBox.

Where can I find more photos of the PirateBox?

Check out the PirateBox Gallery.

Where can I find more videos of the PirateBox?

Check out these PirateBox Videos.

Why did you build the PirateBox?

PirateBox solves a technical/social problem by providing people in the same physical space with an easy way to anonymously communicate and exchange files. This obviously has larger cultural and political implications and thus the PirateBox also serves as an artistic provocation. See this ars technica article and this New Scientist article for more info.

Why is it called the PirateBox?

PirateBox is inspired by the free culture and pirate radio movements. The name is a playful remixing of the title of the world's most resilient BitTorrent site, The Pirate Bay.

Does the PirateBox promote stealing?

No. The PirateBox is designed to facilitate communication and sharing between friends and local community members.

What are some ways the PirateBox has been used?

Along with offline file sharing, media streaming, and community building, the PirateBox has been used by musicians to share their music at festivals and gigs, by teachers to distribute and collect digital materials from students, by emergency response workers and volunteers to publish local first aid information and community updates. It has also been used by librarians and writers to collect, store, and distribute electronic texts, by conference organizers to distribute conference materials and to provide local wireless commenting during presentations. PirateBox has also been used by coworkers collaborating on projects, and by CryptoParty workshop leadersto securely share cryptographic keys.

Does the PirateBox do wireless mesh networking?

The holy grail of offline networking is wireless mesh and we've been experimenting with it for the PirateBox. We have successfully deployed and connected small arrays of PirateBoxes using the B.A.T.M.A.N. protocol and synchronized them with Forban. This is still an experimental feature at this point though we are making good progress. We'll be pushing out an alpha version of this feature in our upcoming release.

Who helps build the PirateBox?

PirateBox was created by David Darts and the lead developer is Matthias Strubel. Aaron Williamson from the Software Freedom Law Center provided advice on the project and Christiane Ruetten originally ported PirateBox to OpenWrt. The project is actively supported by developers and testers all over the world.

Do you know of any other projects similar to PirateBox?

Yes, check out Aram Bartholl's fantastic Dead Drops. There are also several forks of the project, including Jason Griffey's LibraryBox (actually nearly 1:1 and working togehter)., the Bibliobox and the CoWBox (CoWorking Box). A new C.H.I.P based PirateBox fork is AnyfestoCHIP (Project-website). In addition, there are several projects which focus education, creating an offline network, but are not based on Piratebox:

Where can I discuss the PirateBox?

Visit the PirateBox Forum to discuss the PirateBox, share your builds, and receive support. And join us at the annual PirateBox Camp which brings together the PirateBox community of developers, contributors and users for a free (as in beer and freedom) weekend of hacking, learning and networking.

How can I help the PirateBox?

Help out in the PirateBox Forum and IRC

Update documentation and FAQs, apply for an account on IRC

The PirateBox has been featured in over 200 international online and print publications, including New Scientist, Le Monde, Ars Technica, and Wired Italia.

PirateBox has inspired over 30,000 tweets on Twitter and several thousand reader comments. The project has been forked and spawned several derivatives, including the LibraryBox, the BiblioBox, and the CowBow (CoWorking Box).

1 Comments in Response to PirateBox

The blockchain on PirateBox.