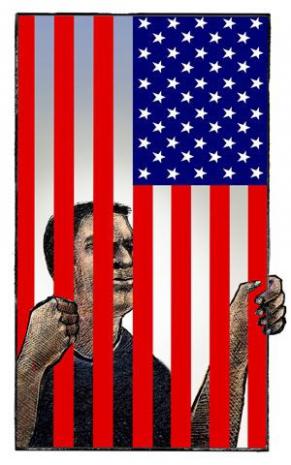 The US maintains a global network of torture prisons for individuals illegally held for political reasons.

An Executive Order authorized it.

Along with countless numbers of global black sites, the torture prison remains open – a collective blight on the national conscience.

The vast majority of detainees in US torture prisons committed no crimes.

The Center for Constitutional Rights (CCR) earlier said that nearly everyone held at Guantanamo  "should never have been detained in the first place."

They (and countless others) were "seized in broad sweeps and sold to the US (for) substantial bounties."

The same goes for nearly all detainees at other US torture prisons.

They were unjustly abducted and wrongfully imprisoned longterm, grossly mistreated, denied habeas rights, due process, and equal protection under law.

Human rights defender Reprieve.org provides pro bono legal and investigative work services for "some of the world's most vulnerable people."

Its "vision is a world free of execution, torture and detention without due process."

On Friday, the organization said long-held Guantanamo political prisoner Ahmed Rabbani was "unanimously cleared for release" after 19 years of political imprisonment without just cause.

In 2002, he was abducted and sold to US personnel in Pakistan for bounty.

Despite "realiz(ing) they had the wrong man," Reprieve explained, he was held anyway.

In Afghanistan at its so-called "dark prison" — where detainees are held in total darkness — he was brutally tortured "for 545 days."

In September 2004, he was taken to Guantanamo and held uncharged and untried until freed at last after 19 years of torture prison hell.

Earlier he said "I'm stuck in Guantanamo, and the world has forgotten about me."

A Pakistani taxi driver, his "crime" was being in the wrong place at the wrong time that happened to be his residence.

He was home when Pakistani intelligence personnel arrested him on orders from the Bush/Cheney regime.

Sold to the US for a $5,000 bounty, his long torturous ordeal began straightaway after abduction.

"For those of us who have supported him, the feeling is one of relief, tempered with sadness for all he has lost."

"The PRB (Guantanamo Periodic Review Board) result is a positive step, but we won't celebrate until he is back with his family in Pakistan and able to hug his 19-year-old son for the first time."

His torture was documented in a December 2014 Report of the (US) Senate Select Committee on Intelligence Committee Study of the CIA's Detention and Interrogation Program.

Heavily redacted when declassified, what's most important in the report is hidden from public view.

Around 19 years of Rabbani's life was stolen by the never-ending US war OF terrorism on humanity at home and worldwide.

In July 2018 the LA Times published op-ed in which he described torture and other forms of abuse by his US captors.

When written, he suffered from "stomach problems so acute that (he could not) eat hard food without vomiting blood."

Yet he was denied digestible food to avoid the ordeal.

Believing he was isolated and forgotten by the outside world, he said "(t)here is no morning and no evening. There is only despair."

Of the original 780 political prisoners at Guantanamo, 38 remain.

Like Obama in January 2009, Biden's impersonator promised to close Guantanamo. Hold the cheers.

Whether open or closed, numerous US black sites operate worldwide.

Undisclosed numbers of political detainees suffer out of sight and mind — forgotten by the outside world.

US regimes continue to commit the highest of high crimes against humanity at home and abroad with no prospect for ending what's going on nor accountability for their criminal class.

Letter to a Tyrant

93%-Vaccinated Ireland Has Gone Back Into 'Partial Lockdown', Including Midnight Curfew