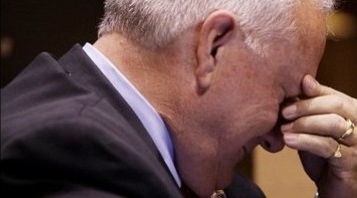 Recall Russell Pearce dodo menace to society
Mesa Arizona, The campaign to remove Russell Pearce from the De Facto State senate of Arizona, is now underway!  Russell has cost the state of Arizona Millions of dollars in lost revenue and turned the State of Arizona into a battleground.   Members of the Republican party are so disgruntled with Russell they have come together to have him recalled and kicked out of office.

Russell's authored a bill known as SB1070 which has divided Arizona and has cost many jobs because of its controversy.   It is thought that the this bill especially with it's timing, is what allowed Jan (i dont know what to say) Brewer to retain her seat as the defacto governor of Arizona.

Russell is now facing a recall drive by republicans to remove a republican.  DeeDee Blase who is the founder of Somos Republicans http://somosrepublicans.com is at Pete's fish and chips on Mesa Drive and Main Street signing other Republicans to Recall Russell.  Russell Pearce the Senate appropriations chairman for the State of Arizona.

Halina Reed who is also responsible for the recall drive mentions how volunteers can get involved to help rid the State of Arizona of this menace to society, Russell Pearce.

The only reason that these idiots want to recall Russell Pearce, is because of his stance on Illegal Immigrants. Because he wants to protect Arizona, they want him out and they will any thing to get that done. These are idiots, the real hate mongerers, socialists. They are Racists, if you are not Hipanic they hate you.

They are Anti-Arizona, they want Arizona returned to Mexico. They don't care how many non-Hispanic Arizonians have to die, to accomplish this. Any one that opposes them, it would seem in their limited train of thought, is a racist. Yet they are the actual racist, all you have to do is listen to them, they are anti-non Hispanic.

Let me tell you, there are more than a few non-Hispanic Arizonians that will fight them on this.