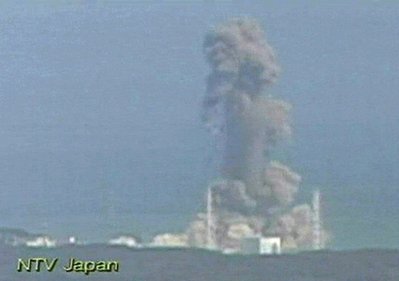 Possibly it's ongoing and concealed. All along, Japanese and Tokyo Electric (TEPCO) officials downplayed or lied about the severity of the crisis. Virtually nothing they say can be believed.

Nor from the Obama administration, budgeting loan guarantees for new reactor construction instead of decommissioning all 104 nuclear plants because operating them risks full core meltdowns.

Under a worst case scenario, millions of Japanese, Pacific rim and northern hemisphere people will be harmed, many gravely. Millions of deaths may result. The dangers of nuclear power can't be overstated. Potentially, all planetary life is threatened. What better reason to end all commercial and military use now.

Core meltdowns occur when heat generated exceeds what cooling systems remove, causing uranium and plutonium fuel to melt. At fault may be coolant problems, including accidents, fires, loss of coolant pressure, low coolant flow, or none at all from high heat causing evaporation. In other words, insufficient cooling elevates temperatures high enough to trigger melting and toxic atmospheric radiation releases.

Measured in rems (roentgen equivalent in man or mammal), it represents the amount needed to damage living tissue. All radiation is harmful, cumulative, permanent, and unforgiving. The more gotten, the greater the danger, especially doses over 100 rems, producing radiation sickness, including nausea, vomiting, headaches, white blood cell loss, and susceptibility to infection.

Doses above 200 rems cause hair loss and other harm. Above 300, significant internal harm, including damaged nerve cells, others lining the digestive track, the reproductive system, DNA and RNA. Severe white blood cell loss also results, the body's main defense against infection, causing vulnerability to cancer and other diseases.

Moreover, radiation reduces blood platelets production, making hemorrhaging more likely. Doses above 450 rems kill half of those exposed. Above 800 assures death in days, weeks, or longer-term after painful illnesses, including leukemia and other cancers.

High atmospheric radiation levels threaten life over the short or longer-term. The more ingested, absorbed or inhaled, the greater the risk. Fukushima is spreading large amounts. If unstoppable, all bets are off.

Panic throughout Japan is increasing. Some Toyko residents are fleeing. Everyone is scared. Radiation levels are spreading and rising. People are jamming airports to leave. Some embassies and companies are evacuating their personnel. Inbound flights are being cancelled.

An anonymous nuclear industry official told The Times of India that TEPCO management is "in a full-scale panic, (not) know(ing) what to do." On March 16, European Union Energy Commissioner Guenther Oettinger told an EU parliamentary committee:

Fukushima "is effectively out of control. In the coming hours, there could be further catastrophic events, which could pose a threat to the lives of people on the island," and beyond.

In fact, global contamination is threatened. Obama said radioactivity wouldn't reach America. He lied. It will reach California by weekend and spread east across the entire country and North America. The industry-controlled World Nuclear News warned of a "dramatic escalation in Japan."

Compounding the threat, around 600,000 exposed Fukushima spent fuel rods are stored unprotected near the top of reactors, making them extremely vulnerable to melting. Nuclear engineer Arnie Gundersen said if they catch fire, it "would be like Chernobyl on steroids."

Several fires, in fact, erupted. Others could ignite any time. If one or more containment vessels ruptures, all bets are off. Fears are it already happened, making a bad situation far worse. Fukushima is an unprecedented disaster, in unchartered territory. Understating the potential catastrophic risk is irresponsible and criminal.

"We believe that radiation levels are extremely high, which could possibly impact the ability to take corrective measures."

Late Wednesday night, the US State Department announced a "voluntary" evacuation of government personnel dependents and other US citizens from northeastern Japan down to Tokyo and Yokohama. Charter flights will be provided. Numerous other nations are urging their nationals to leave.

Nuclear Power in America: How Safe?

"We will continue to work to maintain (a high) level of protection." Reactors are designed to withstand "the most severe natural phenomena historically reported," perhaps forgetting his comments about Fukushima's unprecedented disaster and its unpreparedness to cope.

"The American people should have full confidence that the United States has rigorous safety regulations in place to ensure that our nuclear power is generated safely and responsibly. The administration is committed to learning from Japan's experience as we work to continue to strengthen America's nuclear industry."

Chu, in fact, is deeply compromised, a shill for nuclear interests since his days as director of the Lawrence Berkeley National Laboratory (LBNL), originally called the UC Radiation Lab. Today, the Energy Department runs it, continuing its radiation research, what it's done since the 1940s with little regard for public safety or environmental concerns, as true under Chu. In fact, he was picked as Energy Secretary for his commitment to military and commercial nuclear power, mindless of the risks.

When asked in 2005 if fission-based plants should be part of the energy-producing portfolio, he responded:

Chu also has longstanding ties to BP and Big Oil that funded UC Berkeley's Energy Biosciences Institute he founded a year before becoming Energy Secretary. On matters of oil, nuclear power, and other sources of energy, nothing Chu says is credible.

Obama also has longstanding nuclear industry ties, including with Chicago-based Exelon. On March 14, Bloomberg said it operates "17 reactors at 10 stations in Illinois, New Jersey and Pennsylvania, provid(ing) 20% of US nuclear capacity," according to its web site. His former top political aide, David Axelrod, once lobbied for Exelon, and Rahm Emanuel, his former White House chief of staff, profited handsomely as an investment banker arranging mergers that created the company.

In his proposed budget, Obama includes $36 billion in industry loan guarantees for new facilities, free money. He's committed to jump-start new construction, halted since Three Mile Island in 1979. Already takers are lining up, 20 or more applications pending before the NRC.

He and Chu downplay Fukushima, mindless of industry hazards, including 23 US nuclear plants at 16 locations using the same failed GE-designed Mark 1 containment vessels. Earlier the NRC called it susceptible to explosion and failure because of cost-cutting design failures. Its 1985 study warned that failure within the first few hours after a core meltdown was very likely. Its top safety official at the time said it had a 90% probability of failing if an accident caused overheating and melting. When reactor cooling is compromised, the containment vessel is the last line of defense. However, GE's design is hazardous and unsafe.