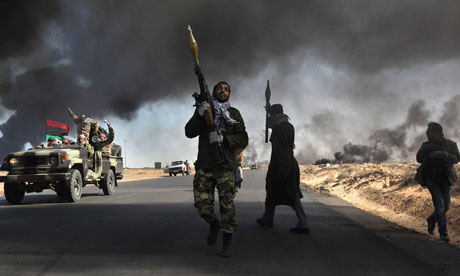 April 18 (Bloomberg) -- Ahmed Algallal, an importer of Kone OYJ lifts in Libya, spent 14 years in the U.K. because his father preferred exile to life under Muammar Qaddafi. “There won’t be another exile for me,” he said. “We win or die.”

Algallal, 42, is part of the patchwork for a new civil society taking shape in Benghazi. While he uses his contacts to secure food and medicine supplies for the front lines, students clean the streets, and teachers and longshoremen organize themselves in tents outside the old courthouse.

The rebels are drawing on the very system of grassroots bodies that Qaddafi outlined in his Green Book, a 1975 manifesto of his revolutionary philosophy. This time, instead of being a means to suppress political parties and keep tabs on local residents, the groups are delegating responsibility and solidifying their grip.

“Qaddafi’s efforts to mobilize citizens to govern themselves, while confined to rhetoric under his rule, has become a reality as the society mobilizes itself against him,” said Ann Marlowe, a visiting fellow at the Hudson Institute.

Libyan rebels have launched the brunt of their attacks on Qaddafi’s forces from their stronghold of Benghazi, a city of 1 million people, and the efforts by the residents are helping to sustain the uprising against Qaddafi’s 42-year rule in the nation that holds Africa’s largest oil reserves.