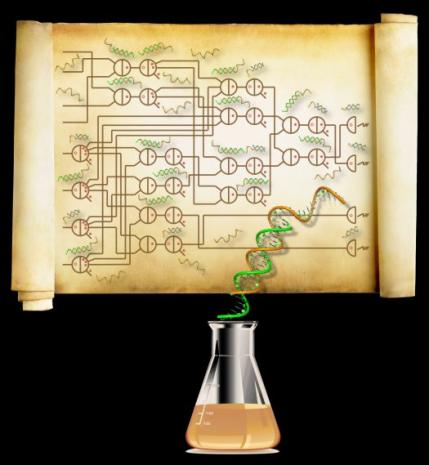 A test-tube circuit made of DNA-based logic gates can calculate the square root of numbers up to 15, using DNA replication and sequence binding to conduct computations. It’s excruciatingly slow — a calculation can take up to 10 hours — so organic laptops are not exactly in our near future. But the real breakthrough is in how this system can enable control of chemical systems.

Researchers at Caltech engineered the most complex biochemical circuit ever created from scratch, according to a new paper published today. The circuit uses DNA instead of electronic transistors to produce the on-off, and-or signals that allow a computer to conduct its calculations.

In a typical computer, transistors let a current of electrons flow in and out. The DNA computer instead uses pieces of short, single-stranded DNA or partially double-stranded DNA placed in a test tube of salt water. The strands stick out like tentacles from the DNA’s double helix, as a news release from Caltech explains. The DNA molecules collide in the water and bind together, producing and releasing offspring molecules. These act as the signals, like electrons in a traditional chip, and they travel among the DNA “gates,” connecting the circuit.

Pairs of gates can create and-or logic based on the output molecules observed, as Ars Technica explains it. (Check out Ars Technica's post for a more thorough explanation of how this works.)

What does Decentralized Technology Really Mean?

NDI® 5 - The Whole World is Your Studio