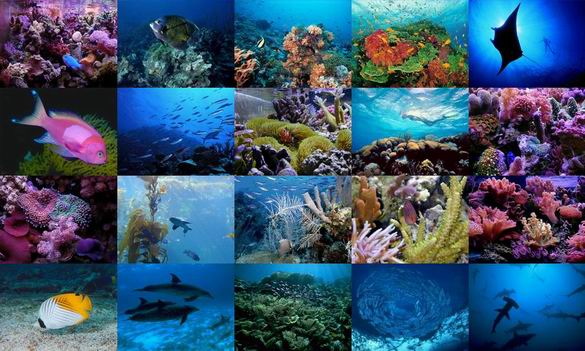 Pollution and global warming are pushing the world's oceans to the brink of a mass extinction of marine life unseen for tens of millions of years, a consortium of scientists warned Monday.

Dying coral reefs, biodiversity ravaged by invasive species, expanding open-water "dead zones," toxic algae blooms, the massive depletion of big fish stocks -- all are accelerating, they said in a report compiled during an April meeting in Oxford of 27 of the world's top ocean experts.

Sponsored by the International Programme on the State of the Ocean (IPSO), the review of recent science found that ocean health has declined further and faster than dire forecasts only a few years ago.

These symptoms, moreover, could be the harbinger of wider disruptions in the interlocking web of biological and chemical interactions that scientists now call the Earth system.

All five mass extinctions of life on the planet, reaching back more than 500 million years, were preceded by many of the same conditions now afflicted the ocean environment, they said.

"The results are shocking," said Alex Rogers, an Oxford professor who heads IPSO and co-authored the report. "We are looking at consequences for humankind that will impact in our lifetime."

Three main drivers are sickening the global marine environment, and all are a direct consequence of humans activity: global warming, acidification and a dwindling level oxygen, a condition known as hypoxia.

Bill Gates Is LITERALLY Going To BLOCK THE SUN in June!!

12,500-year-old wooden sculpture is a 'unique and unparalleled find' in human history

Lomborg: 50 years of unmitigated climate change might leave us only 356% richer instead of 363%