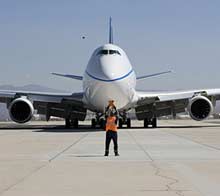 Last week, for the first time, a jumbo jet used a blend of biofuel and kerosene on a transatlantic flight. Also last week, KLM Royal Dutch Airlines announced a biofuel supply agreement to commence regular flights on a biofuel-petroleum blend on 200 Amsterdam-to-Paris runs starting in September. Lufthansa could beat it by a month under previously announced plans to launch a six-month test on Frankfurt-Hamburg flights.

Such regularly scheduled operations mark a big jump from the one-off biofuels flights that airlines have conducted since 2009. Aviation and biofuels sources say this indicates that biofuel-based jet fuels are ready to be scaled up. Amy Bann, director of environmental policy for Boeing's commercial airplanes division, says the KLM and Lufthansa announcements "signal to governments, fuel processors, and the financial community that the demand and market for these fuels exist."

Pressure to cap and ultimately reduce greenhouse-gas emissions is driving the developments. The European Commission is making flights within, into, and out of Europe subject to its carbon-trading scheme starting in 2012—a move that will cost the aviation industry an estimated €1.4 billion ($2 billion) next year and about €7 billion by 2020,  according to a March 2011 report by Oslo-based consultancy Thomson Reuters Point Carbon.
Environmental groups say biofuels make sense for aviation, since they are the sector's only alternative to petroleum. "You're not going to have electric airplanes," says Kate McMahon, biofuels campaign coordinator for Washington-based Friends of the Earth.