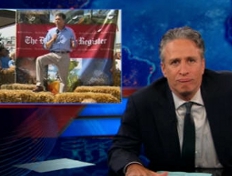 Comedy Central’s Jon Stewart noted Tuesday that there is something a little creepy about the way Republican presidential candidate Rick Perry feels about his country.

“I think you want a president who cares about America, that’s in love with America,” Perry said Monday in Iowa.

“You want a president that’s in love with America,” Stewart repeated. “You want a president who would in a rain storm, grab America’s hand and take shelter with America in a nearby barn. And maybe help America out of its wet clothes. Maybe lay America down on some hay bales and as America and Rick Perry become one, the sounds of their love making merging, with the thunder storms cacophany, the barn shutters rattling the livestock. The livestock, they want to look away, but they can’t. They’re eyes are transfixed.”

“I am Rick Perry and unlike Barack Obama, I will fuck the shit out of America!” he exclaimed. “America, you got a pretty mouth.”

“That was awkward,” Stewart added.

3 Comments in Response to Stewart: Rick Perry ‘will f*ck the sh*t out of America!’

I have to admit to never having watched (listened0 to Stewart. But, I am certain that every joke or punchline ever delivered had some basis in truth. (I seem to recall a survey that showed that something like 40% of teenagers actually "believe that Stewart is a 'real', dare I use the J - word, journalist"...Droll, but pathetic!

The few posted replies to this "article" are mostly sad; they all leave one to shudder, thinking who these vidiots have or will vote for, assuming they can find a polling place with both hands.

To even speculate that government in the U.S. has any inclination toward protecting and administering our democratic republic - for public safety and good, is a sure sign of ignorance and a few of life seen through rose-colored glasses. Granted, the government should be protecting U.S. citizens - from without and, especially, from within (corporate criminals and out-of-control "criminal justice").

Considering it should also be administering the wealth (all of it) of the nation and protecting those who are least able to fend for themselves and is failing at every juncture, without compunction or even a pretext of regret or responsibility, eeven if someone in Washington "grew a pair" or suddenly discovered honor, integrity, patriotism, and the ability to generate an original thought, it's very doubtful that anything would change, simply because the entire system and its smarmy, feckless cadre of servile pukes were bought-and-paid-for decades ago.

As for Perry, he is unfortunately little more than a pandering, petty (oc)cult leader, who knows how to incite others of his ilk. He's pretty scary. Then most "powerful" zealots are and, throughout history, always have been!

Those who liken Perry to the "last Texan who was President" are missing a step: The last Texan was an idiot; Perry is a self-righteous, self-serving bigot!

There was a list of "comedians" that are thought to be "pragmatic". David Letterman's name was on it; talk about delusions. Everyone else on the list ought to be insulted. Letterman? Such is the state of at least some portion of our collective consciousness...So much for "intelligent design.

This is probably boring me at least as much as it's boring you...

DON'T LEAVE THE KITTENS ON THE GRILL.

Ah. Finally. Yes "Stewart" is a shameless liberal and one can only admire how brave a critic he is until he has a real powerbroker on, a real architect of neoconservative war power machine, the Feiths and Perls and the pandering Powell (Colin that is, not the esteemed editor of FP) in which case Steward puts on his adorable sheepish grin. "Who, me?"

Yes, how adorable is Jon Stewart when he feeds from the hand of the powerful? But during the GWB years I adored him indeed, he was great. So was Olberman. The politiscape at that point indicated these men to be nearly universal iconoclasts!

Liberals and progressives everywhere are subjecting themselves to emotional hara-kiri, gutting themselves on the altar of aspirations and bleeding bitter laments: were did we go wrong? It's exactly the kind of gut-twisting "introspection" that constantly bogs them down. They opine on boards and go on at length in precisely the same manner as I do now but there's a difference between them and us: we actually get motivated and do something about it.

So take a moment, conservative and libertarian and other peoples to opine with me and mourn and gnash our teeth and don sack-cloth and besmudge our faces with ashes and hurl dust into the air and now,

I have to get back to phone banking for Ron Paul! Troll ya laterz!