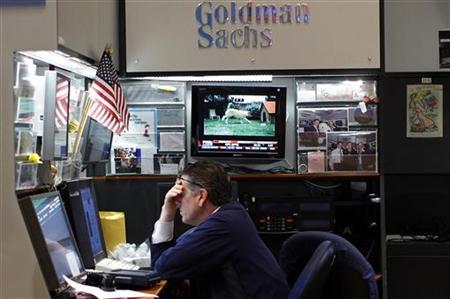 (Reuters) - Goldman Sachs Group Inc posted its second quarterly loss as a public company on Tuesday as its investment portfolio lost billions of dollars in value.

Goldman, the largest U.S. investment bank by assets, set aside 59 percent less money for compensation, the latest sign of how much Wall Street bonuses are likely to fall this year. Goldman's drop in pay reflects a 4 percent staff reduction as well as a 60 percent decline in revenue from the year-earlier third quarter.

Goldman's results underscore the headwinds that banks face as new regulations and market turmoil squeeze profits. Its investment losses also show that even as regulators clamp down on short-term risk-taking, banks can suffer losses on longer-term holdings.

What Will The Democratic Takeover Do To The Economy?

Peter Schiff: We Don't Get Any Government For Free

Why Most Fell for the Lockdowns, While a Few Stood for Liberty

Biden says $2,000 checks to 'go out the door immediately' if Democrats win in Georgia

Is King Dollar About To Collapse?

My predictions for 2021 are almost fully aligned with James Howard Kunstler: Read the list here

The Threat of Authoritarianism in the U.S. is Very Real, and Has Nothing To Do With Trump