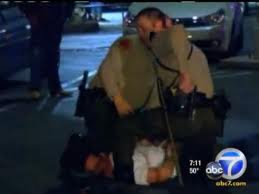 Daniel Hiler ran out of gas during an evening motorcycle ride in Oildale, California on December 16. While walking his bike to a gas station, the twenty-year-old father of two ran into a family friend named Chrystal Jolley. The pair was crossing a street at a widely-recognized intersection when they were fatally blindsided by a vehicle traveling at a speed well in excess of the posted speed limit. Despite the fact that darkness had descended, the driver hadn’t turned on his headlights. The victims were killed instantly.

Within minutes, police swarmed the scene, and arrests were made — none of which involved the driver, Deputy John Swearengin of the Kern County Sheriff’s Office. The four people arrested were relatives of the victims, who got into what the Sheriff’s Office described as an “altercation” with California Highway Patrol officers when they attempted to identify the victims.

"I was at home on Friday night working on my car when someone came running over and told me that a deputy ran over my daughter in the street,” recalls Jimmy Clevenger, Jolley’s father. “I ran down here, I was very upset…. The next thing I know, they had me by the neck and threw me to the ground and said I resisted arrest. My daughter was dead in the street and it was their fault.”

The outraged relatives were taken to jail, and face criminal charges. Swearengin, the killer, was taken to the hospital and wasn’t compelled to undergo drug or alcohol screening

The posted local speed limit (for Mundanes, of course) is 45 miles per hour.  According to several on-scene accounts from horrified witnesses, Swearengin blew through the intersection at a speed of 75–90 miles per hour. Despite the fact that he was obviously in a hurry, Swearengin didn’t activate his siren or running lights — or, according to at least one eyewitness, his headlights.

Sheriff Donny Youngblood told the Bakersfield Californian that the deputy “was responding to a report of a stolen vehicle with a suspect still at the scene” when he struck his victims. This would mean that he was not involved in a high-speed pursuit. Furthermore, as some skeptical witnesses pointed out, the main office of the Sheriff’s Department is about a mile or two west of the intersection where Swearengin killed Hiler and Jolley — and he was headed that direction at the time of the incident. This suggests that the deputy wasn’t motivated by an urgent call from an isolated and over-matched comrade, but rather engaging in a favorite pastime of uniformed adolescents — “Kickin’ ass and drivin’ fast.”

Some residents of Oildale, a suburb of Bakersfield, describe the Kern County Sheriff’s Deputies as notorious for their habit of speeding through the town’s narrow streets, blithely ignoring speed limits without bothering to activate their lights or sirens.

2 Comments in Response to We Killed Your Daughter; You're Under Arrest

How can anyone say, "Sorry", to the victims of this latest malfeasance and cop- intitiated treachery? This sort of thing is happening at an alarming rate, across the United States:  It is happening because there is no accountability and there is little or no recourse, assuming there are survivors. The federal and state governments have long ago declared citizens to be dog shit! There is almost no accountability, and there is NEVER blame! The thugs with badges believe they can do any damn thing they want to - anything they are willing to lie and swear to, anyway, because they get away with it all the time. If you believe for an instant that you stand a chance against the law enforcement arm of the "criminal justice system", you are a blithering idiot!

I have no motive to lie to you about any of this. If you don't believe me, just take the time to check the record. The only thing you can do is stay as far away from this freak show as possible; pick your friends wisely; and, solve your own problems. If you have money, get as far away from these traitors and social misfits as you possibly can.

Abraham Lincoln is quoted as saying,"There is no greater tyranny than an unjust law." He wasn't particularly wrong. However, I doubt that he ever had to deal with a bad cop or his masters.