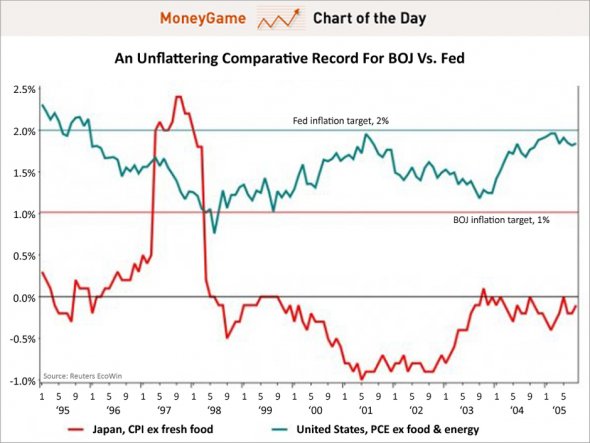 The Fed and the ECB take a lot of lumps, but the world's worst central bank might be the Bank of Japan.

Jefferies' Naomi Fink has a big report looking at the macro situation in Japan, and she has no kind words for the BoJ.

Essentially, the bank has a big habit of overpromising and underdelivering when it comes to its goals.

Here's Fink's commentary on the latest out of the BoJ, which nicely captures the lack of credibility held by the bank:
Because overcoming deflation is as much about giving rise to expectations of future growth as buying assets – accompanying rhetoric from Gov. Shirakawa instantaneously killed any nascent reassessment of BOJ commitment. Shirakawa claims that "the levels of interest rates in Japan -- whether they be interest rates on loans or issuance rates of corporate bonds -- are at least as low as those in the United States... whether... nominal interest rates or real... adjusted for inflation expectations". This claim simply withers in the face of greater scrutiny. .
.. the BOJ uses 1% and 2% for respective Japanese and US "inflation expectations". This comparison is unfair. The US has already achieved this rate (also the Fed’s target) but even the BOJ itself is reluctant to put a timeframe around this target. Neither markets nor politicians buy the claim that real rates are “low by any measure”.

This chart shows how consistently Japanese inflation has undershot the target.

The red line is Japanese inflation, and the light red horizontal line is the target. Total whiff.

Will the Dollar Always Rule? Ask the Archduke

Pandemic Pandemonium: The Tides Of Globalization And Financialization Reverse