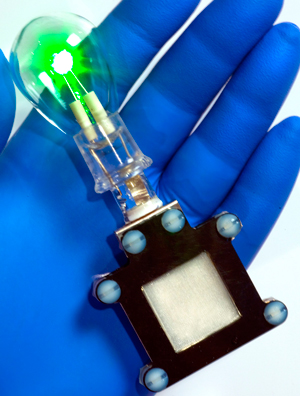 PolyPlus—a tiny, 27-person battery startup—has decided it needs to learn the ropes of volume manufacturing in order to bring its technology to market.

Earlier this week, the Berkeley, California-based company was awarded a grant, along with Johnson Controls and Corning, from the Department of Energy's Innovative Manufacturing Initiative. The $9 million grant will fund a pilot line to make a key component for lithium-water, lithium-air, and lithium-sulfur batteries, new chemistries the company hopes will deliver a big jump in energy density over today's batteries.

PolyPlus is one of dozens of companies pursuing better batteries, but its business model is different than most. It's only taken money from investors with a long time horizon and it wants to make manufacturing, not just material science, a core skill.

Incremental improvements to lithium-ion batteries can be added onto existing production machines, but introducing a completely new chemistry with the potential for a breakthrough—something a number of other companies are trying to do—requires actually making the hardware, says CEO Steven Visco.

"Nothing like this has been done before, so when we license this it's a lot more valuable when people can see the product and they can take products off of a working line. It gives us credibility in the marketplace and we can get feedback," he says.