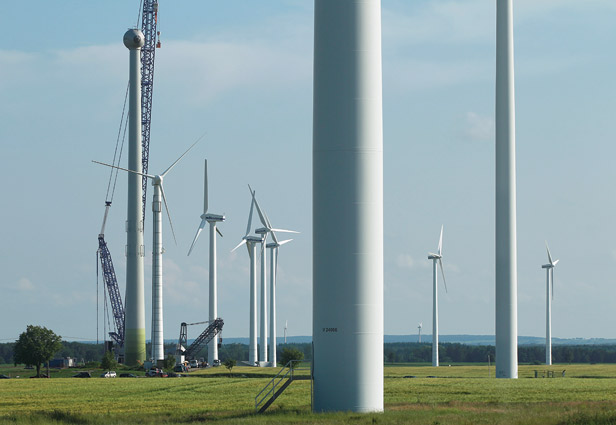 Along a rural road in the western German state of North Rhine–Westphalia lives a farmer named Norbert Leurs. An affable 36-year-old with callused hands, he has two young children and until recently pursued an unremarkable line of work: raising potatoes and pigs. But his newest businesses point to an extraordinary shift in the energy policies of Europe's largest economy. In 2003, a small wind company erected a 70-meter turbine, one of some 22,000 in hundreds of wind farms dotting the German countryside, on a piece of Leurs's potato patch. Leurs gets a 6 percent cut of the electricity sales, which comes to about $9,500 a year. He's considering adding two or three more turbines, each twice as tall as the first.

The profits from those turbines are modest next to what he stands to make on solar panels. In 2005 Leurs learned that the government was requiring the local utility to pay high prices for rooftop solar power. He took out loans, and in stages over the next seven years, he covered his piggery, barn, and house with solar panels—never mind that the skies are often gray and his roofs aren't all optimally oriented. From the resulting 690-kilowatt installation he now collects $280,000 a year, and he expects over $2 million in profits after he pays off his loans.

Stories like Leurs's help explain how Germany was able to produce 20 percent of its electricity from renewable sources in 2011, up from 6 percent in 2000. Germany has guaranteed high prices for wind, solar, biomass, and hydroelectric power, tacking the costs onto electric bills. And players like Leurs and the small power company that built his turbine have installed off-the-shelf technology and locked in profits. For them, it has been remarkably easy being green.