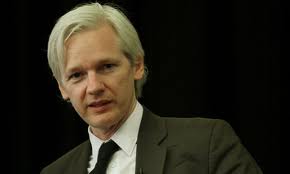 Summer silly season is upon us. First, three girls from the Russian punk band Pussy Riot are on trial in Moscow for the heresy of mocking Vlad Putin and the Orthodox Church.

Now comes the uproar in London over provocateur and bad boy Julian Assange. It’s hard to know whether to laugh or cry.

Assange, founder of Wikileaks, sought political asylum two months ago in Ecuador’s London Embassy to escape Britain’s attempts to deport him to Sweden.

Assange is wanted for questioning by Swedish police over seemingly flimsy charges by two dubious female friends of his of “sexual misbehavior,” whatever that is. So far, Assange has not been charged with any crime.

But if Assange returns to Sweden, he risks being extradited to the United States where his massive revelations of US government diplomatic and military emails infuriated Washington and led to demands he be charged with treason and espionage, both of which carry the death penalty. Sending Assange to the US and the risk of execution would probably violate the European Union’s laws and human rights conventions.

No Vaccine Trials Made on the Elderly Vaccinate Them Even if it Kills Them?