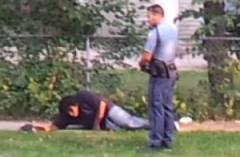 The clip, which was uploaded to You Tube yesterday, begins with the man prostrate on the floor. According to the man filming the footage, he has already been tased and maced in the face.

The victim asks the cop over and over again what he is being arrested for but the officer refuses to answer.

“Can you tell me what’s going on? You don’t have a warrant for my arrest,” the man pleads as he coughs as a result of being pepper sprayed.

At the 1:15 mark in the video, the cop kicks the man in the throat for no apparent reason.
The man is then handcuffed before the officer punches him in the head. He is then slammed onto a patrol car and held down as his hair is pulled back.

As officers struggle to put the man in the patrol car, other cops try to intimidate the man recording the video.

From the video it appears as if around ten police officers are involved in the arrest of one man.