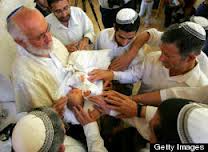 In a morning meeting, the nine-member panel of doctors and public health professionals said that though the regulation had been challenged by some Orthodox Jewish religious authorities as an unconstitutional infringement of their religious freedom, the risk of disease from the ancient procedure was serious enough to warrant action.

Indeed, some panel members said they believed that requiring consent did not go far enough. “It’s crazy that we allow this to go on,” said Dr. Joel A. Forman, a professor of pediatrics at Mount Sinai School of Medicine.

Infectious disease experts widely agree that the oral contact, known in Hebrew as metzitzah b’peh, creates a risk of transmission of herpes that can be deadly to infants, because of their underdeveloped immune systems. Between 2004 and 2011, the city learned of 11 herpes infections it said were most likely caused by the practice. Two of those babies died; at least two others suffered brain damage.

While most ritual circumcisers, known as mohelim, no longer use oral contact to pull blood away from the circumcision incision — they use gauze or sterile glass pipettes instead — the practice has been strongly defended by ultra-Orthodox Jewish rabbis who believe the practice is both safe and faithful to Talmudic codes. More than 200 ultra-Orthodox rabbis have ordered their adherents not to comply with the regulation.