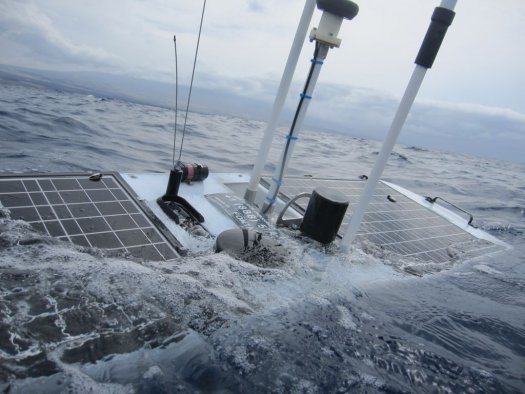 In November of last year, Liquid Robotics dropped four of its brand new Wave Glider robots in the water just off the coast of San Francisco with hopes of making history and learning a thing or two in the offing. Two of the robots would set a course for Japan and the other two for Australia, each destination roughly 9,000 nautical miles away. It was to be the longest journey ever taken by any autonomous vehicle, a slow but steady swim across the entire Pacific Ocean that would collect and relay high resolution oceanographic and atmospheric data all along the way, stopping only for a quick maintenance check-up in Hawaii--if they made it that far at all.

And so Liquid Robotics’ engineers dumped their robots into the rolling water and turned them loose, uncertain as anyone else whether the robots could survive the weather, waves, and wildlife they would surely encounter on a trans-Pacific crossing. There are sharks out there, after all. Massive waves and gale-force winds. There’s a whole lot of saltwater out there, itself a force for destruction and disruption of mechanical systems. And yet almost exactly a year after launching the Wave Glider known as “Papa Mau” navigated around the Great Barrier Reef and arrived off the coast of Queensland Australia last week, half a world away from where it started and only somewhat worse for wear.

Don’t lose the significance of this story in this milestone. Papa Mau and the three other Wave Gliders that are still out there paddling toward their destinations have certainly done something groundbreaking, but as with most inaugural journeys this one will soon pale in comparison to the impact of the voyages that will follow it. Liquid Robotics set out to prove that its Wave Gliders could spend months, even a year, traversing the ocean, beaming back data without stopping for so much as a cigarette (other than that short Hawaiian layover, that is). Having answered the key question about whether the technology can actually stand up to this task, Liquid Robotics can now address a much broader question: what do we want to know next?