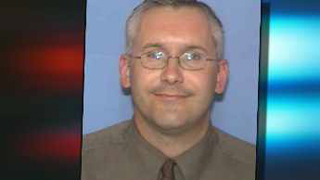 During the investigation, Officer Tony Trow admitted he was taking evidence home and keeping it in his garage. It was also discovered Trow put off writing a murder report for five years.

Curtis and Chyendall Gibson are the parents of that murder victim, 19-year-old Daron Gibson.

"We think about him not just every day but sometimes every hour, every moment," said Chyendall Gibson.

At times it seemed like the sky was the limit for Daron Gibson. He had graduated high school and was figuring out exactly where he wanted his future to take him. During a night out with friends in July 2007, Daron was shot dead outside Clubhouse Bar in Tempe.

"It leaves you empty. It actually just knocks you to your knees, literally," said Chyendall Gibson.

Five years later the grief that the Gibsons had learned to manage resurfaced.  CBS 5 News uncovered the possibility Daron Gibson's killer will likely never get justice.

"What bothers me is (Trow) didn't do his job," Chyendall said. "He didn't do due diligence. He took an oath to uphold the integrity of his badge and the public's trust. Where was that when he was taking this evidence and placing it in his garage?"

An internal investigation revealed from September 2004 to March 2012, Trow stored evidence from five cases in his garage to hide his unfinished work. That included case notes, crime scene photos and even original recordings of interviews. The report from that investigation said those items had been tossed together in cardboard boxes.

It was also discovered Trow didn't write nearly a dozen reports, some dating as far back as 2007.

The report showed Trow also didn't bother to turn in the rape kit of a 17-year-old.

"This is a no brainer," said Marc Victor, a criminal defense attorney. "This is the kind of mistake you have to ask yourself what on earth was the detective thinking?"

Victor said if these cases are based on evidence, it's a good chance all of them could be dismissed.

The Tempe Police Department wrapped up its investigation in May. Trow wasn't fired, he received an unpaid 160-hour suspension.

"Where is the accountability in the department?" asked Daron's Gibson's father, Curtis Gibson. "Where are the checks and balances when you don't do your job and somebody oversees you to make sure it gets done?"

Tempe police Chief Tom Ryff ultimately made the decision to keep Trow on the force. CBS 5 News tried for more than a week to get Ryff or someone with the department to go on camera and explain why Trow still has a job. The station's requests were denied.

"In deciding the appropriate level of disciplinary action, a complete evaluation of Officer Trow's work history was completed, finding overall superlative performance, and no prior violations of departmental policy in his 12-year career."

Even after Daron Gibson's case went cold, the Gibsons said they stayed in contact with Trow.

Over the years, dozens of emails were exchanged.

In one of those emails, Trow stated, "Neither I nor the Tempe Police Department have given up on this investigation in any way. In fact, I have spent a lot of time on this case often at the expense of time in working other cases."

"He wrote that to me while evidence sat in his garage," Chyendall Gibson said. "That's just shameful. Officer Trow does not deserve to wear the badge."

The Gibsons said that in the seven months since the investigation into Trow, the Tempe Police Department never told them their son's case had been botched. Now they refuse to let Daron Gibson's murder be swept under the rug again.

"To stand here and be silent in this situation you become part of the problem not part of the solution. That's why it's very important for us to speak out. We want this fixed," said Curtis Gibson.

It's likely the families of the victims in the nine other crimes still don't know Trow mishandled their cases.

I have lived in Tempe for over 30 years. I was shocked to just find out about this. I sent the following email to the city council members.

I just viewed online Channel 5's news story explaining Detective Trow's unprofessional, and perhaps criminal, conduct and Chief Ryff's slap on the wrist.   If what I've seen is true, my questions are when is the city council going to investigate which other detectives are doing this, what other criminal investigations have been compromised, when are we going file criminal charges against Detective Trow and fire and replace him and Chief Ryff?   I've personally had almost all good interactions with Tempe police officers. I've enjoyed their friendly, professional manner. No police department is perfect but if the above is true, this behavior is an insult to their efforts and has cast a dark shadow over the whole department and my positive view.   I wish you the best in the hard work required to truly correct this swiftly.   Sincerely,   Norm
Make a Comment (2) • Email Link • Send Letter to Editor