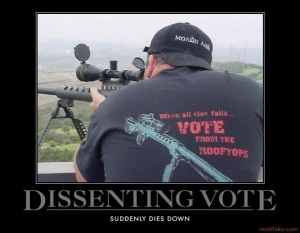 Would you be surprised to learn that this intelligence comes not from a shadowy whistle-blower but from the FBI itself – specifically, from a document obtained from Houston FBI office last December, as part of a Freedom of Information Act (FOIA) request filed by the Washington, DC-based Partnership for Civil Justice Fund?

To repeat: this comes from the FBI itself. The question, then, is: What did the FBI do about it?

Remember the Occupy Movement? The peaceful crowds that camped out in the center of a number of cities in the fall of 2011, calling for some recognition by local, state and federal authorities that our democratic system was out of whack, controlled by corporate interests, and in need of immediate repair?

That movement swept the US beginning in mid-September 2011. When, in early October, the movement came to Houston, Texas, law enforcement officials and the city’s banking and oil industry executives freaked out  perhaps even more so than they did in some other cities. The push-back took the form of violent assaults by police on Occupy activists, federal and local surveillance of people seen as organizers, infiltration by police provocateurs—and, as crazy as it sounds, some kind of plot to assassinate the “leaders” of this non-violent and leaderless movement.

But don’t take our word for it. Here’s what the document obtained from the Houston FBI, said:

An identified [DELETED] as of October planned to engage in sniper attacks against protestors (sic) in Houston, Texas if deemed necessary. An identified [DELETED] had received intelligence that indicated the protesters in New York and Seattle planned similar protests in Houston, Dallas, San Antonio and Austin, Texas. [DELETED] planned to gather intelligence against the leaders of the protest groups and obtain photographs, then formulate a plan to kill the leadership via suppressed sniper rifles. (Note: protests continued throughout the weekend with approximately 6000 persons in NYC. ‘Occupy Wall Street’ protests have spread to about half of all states in the US, over a dozen European and Asian cities, including protests in Cleveland (10/6-8/11) at Willard Park which was initially attended by hundreds of protesters.)

So now we all can see what has happened in America. What I mean is, if the members of Congress or the Judiciary don't play ball with the super rich, a few snipers can start to take them out one at a time. But the snipers won't do such a thing except in extreme circumstances. What they will be ordered to do is quietly take out one or two staff members, or even a family member, as a warning. If that doesn't work, then the Congressman or Senator.