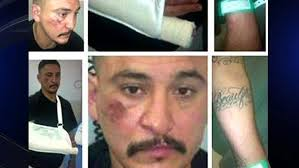 Brian Cisneros told KCAL9’s Suraya Fadel that he was riding his bike to his job at Ralphs in Marina del Rey Friday night when he claims he was approached by two LAPD Pacific Division officers at Ida and Redwood avenues.

“The doors flew open, and the lights were on me. They drew their guns down, and they just attacked me. And they threw me on the floor, and they started stomping my face in,” he said.

Cisneros added, “They choked me out and all that, and then they threw me on their hood.”

The alleged victim said he never resisted the officers.

At the end of the ordeal, Cisneros said the officers cited him “for no lights after hours of darkness.”

Cisneros said he went to the hospital the next morning, where he was treated for a dislocated shoulder and a fractured elbow, among other injuries.

He then filed a complaint.

Although he has a criminal record, Cisneros said he’s been clean for 10 years.

“I’m a working man, a family man, I’m just trying to take care of my business,” he said.