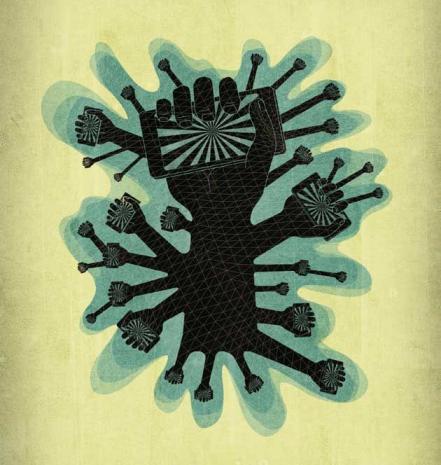 JOSEPH BONICIOLI mostly uses the same internet you and I do. He pays a service provider a monthly fee to get him online. But to talk to his friends and neighbors in Athens, Greece, he's also got something much weirder and more interesting: a private, parallel internet.

He and his fellow Athenians built it. They did so by linking up a set of rooftop wifi antennas to create a "mesh," a sort of bucket brigade that can pass along data and signals. It's actually faster than the Net we pay for: Data travels through the mesh at no less than 14 megabits a second, and up to 150 Mbs a second, about 30 times faster than the commercial pipeline I get at home. Bonicioli and the others can send messages, video chat, and trade huge files without ever appearing on the regular internet. And it's a pretty big group of people: Their Athens Wireless Metropolitan Network has more than 1,000 members, from Athens proper to nearby islands. Anyone can join for free by installing some equipment. "It's like a whole other web," Bonicioli told me recently. "It's our network, but it's also a playground."

Indeed, the mesh has become a major social hub. There are blogs, discussion forums, a Craigslist knockoff; they've held movie nights where one member streams a flick and hundreds tune in to watch. There's so much local culture that they even programmed their own mini-Google to help meshers find stuff. "It changes attitudes," Bonicioli says. "People start sharing a lot. They start getting to know someone next door—they find the same interests; they find someone to go out and talk with." People have fallen in love after meeting on the mesh.

The Athenians aren't alone. Scores of communities worldwide have been building these roll-your-own networks—often because a mesh can also be used as a cheap way to access the regular internet. But along the way people are discovering an intriguing upside: Their new digital spaces are autonomous and relatively safe from outside meddling. In an era when governments and corporations are increasingly tracking our online movements, the user-controlled networks are emerging as an almost subversive concept. "When you run your own network," Bonicioli explains, "nobody can shut it down."

1 Comments in Response to Forget the Net - Bring on the Mesh!

I'm no techie but, this sounds a whole lot more doable than one might think. It wouldn't surprise me if somebody at GitHub.com hadn't already built some software that could make this whole thing a lot easier.

If you look around the city, you find all kinds of old, abandoned, Dish antennas. Imagine revamping them to make your WiFi work across the country.

Taiwan Has The Fastest Internet In The World, USA Is 4th...

What Is Skiff? Everything You Need to Know About the Encrypted Email and Drive Platform

Your Life is a Recording. Which Someone can Play Back.