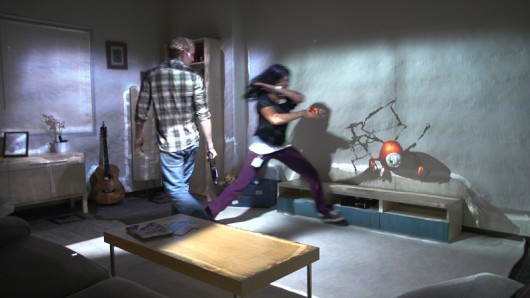 After concluding that that system -- which used a Kinect camera and a projector to bring video games into the living room -- was too expensive to be released commercially, the company has revealed RoomAlive, which is even more expensive and even less practical. Thankfully, it's also an intriguing glimpse at the possible future of gaming.

RoomAlive adds a new dimension to gaming. Literally. Using projection mapping, video games can be brought to life in your own living room. Instead of merely playing a game on a screen, RoomAlive puts you in the game, with visual elements projected onto the walls and surfaces of your living room. Using Kinect sensors, these visual elements are interactive, meaning, for example, that you can point and shoot at an enemy sitting on top of a cupboard.

The core component of RoomAlive is multiple projector depth-camera units, or procams. Each of these comprises a projector, a Kinect sensor, and a computer.