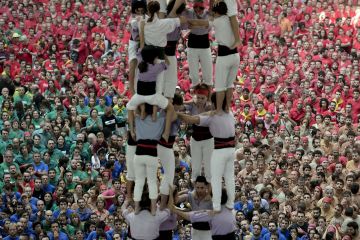 If a people's pastimes reflect its character, Catalans are clearly a formidable bunch.

On Sunday, hundreds gathered in front of this ancient city's town hall to engage in the traditional building of human towers.

Men, women and children wearing white pants, broad black waistbands and brightly colored shirts to represent their towns or neighborhoods clambered on top of each other, balancing on teammates' shoulders until they towered high over the cobbles of the plaza below.

In a heart-stopping climax, the pink-shirted Minyons de Terrassa team constructed a rare 10-story tower, triggering a roar of appreciation from crowds gathered for the annual St. Narcis festivities.

The building of the towers, or "castells," dates back to at least the 1700s. It's an undeniably impressive exercise in courage, organization and teamwork.

In the current tense political times, leaders of Catalonia's independence movement are hoping to harness the castellers' grit and community spirit as they prepare to confront the Spanish government over breaking away from Madrid's rule next week.

Utah Reporter Stalks Paramedic at His Home to Out Him and Harass Him on Why...