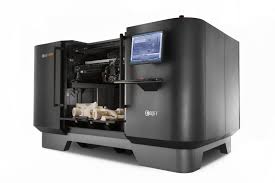 There are problems of strength, accuracy, and technical ability involved in this process, and it isn't "Beam me up Scottie" quite yet.

Some of you guys/girls may have heard of rapid prototyping, which is also called 3d printing. If you haven't, it is roughly equivalent to 21st century blacksmithing. First, you make a computer model, and then you make a part from the computer model. The materials and processes vary. I will try and give a general non-technical description of the major materials and processes.

I will append a couple of links, to help in your understanding of the processes and physical properties of the printed model.

The first article that I read about rapid prototyping was published in the late 1980's, and it involved what is called photo reactive polymers. The article didn't mention "3D systems", and it didn't mention the term stereo-lithography. However, it did talk about multiple lasers curing the photo reactive polymer material in a vat. That is turning a fluid into a solid.

STEREO-LITHOGRAPHY: A light-protected machine with a vat of photo reactive polymer that uses a laser and actuating equipment to create a model by turning a liquid plastic into a solid plastic part.