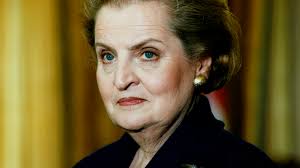 Madeline Albright, who served as Secretary of State under President Bill Clinton, worked to impose brutal economic sanctions on the Iraqi people causing hundreds of thousands of children to starve to death as a direct result.

When asked about the human cost during a '60 Minutes' interview taped in 1996, Albright infamously said that "the price is worth it" to murder those Iraqi children supposedly to punish Iraqi dictator Saddam Hussein.

These days, Albright is opposing the presidency of Donald Trump by pretending to be an anti-fascism advocate. She is traveling the country to promote her book, "Fascism: A Warning." During a recent appearance, she was asked about her comments on '60 Minutes' by a liberty activist.

The entire clip can be viewed here:

"Back in 1996, you said the deaths of 500,000 children was worth it… Do you take that back?" asked Steven Clyde, a libertarian anti-war activist who hosts the "Peace & Liberty Podcast."

Clyde claims that he was immediately bum-rushed by Albright's handlers and ushered out of the event as the former secretary of state glossed over his question entirely.

"The [60 Minutes] clip from 1996 starts off with a picture of a mangled looking child, and the question at the time was as clear as day and she understood the context quite well," Clyde said, unwilling to accept her non-response to his question.

Can someone please tell me why this is rolling thru Kentucky?

The Mark of the Beast Has Arrived

WHAT WE ARE ABOUT TO SEE * MERRITT * PALEVSKY * ZELENKO * NWO

Why Did The Media Leak Out "Today's The 1st Day Of the NWO?" & Why Is Biden Monitoring

Do We Live in a Brave New World?