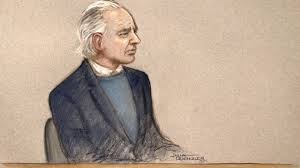 "Yes, there was some controversy about her sitting on the case," Robinson said.

"She won't be sitting on the case going forward."

Robinson told Australian journalist Quentin Dempster at the event that she was "not sure" who would take over from Arbuthnot.

Robinson made her remarks in response to a question from the audience about Arbuthnot's reported conflict of interest in the case. Robinson did not provide further details. She spoke in future tense, but it is not clear if she was referring to Arbuthnot maintaining supervision of the case while turning over the courtroom duties to another judge, which she did weeks ago, retaining the right to influence rulings, or whether Arbuthnot has recused herself from the case. Consortium News has contacted Robinson to provide clarification.

On Thursday, Matt Kennard and Mark Curtis of the Daily Maverick reported:

"Lady Arbuthnot has recently appointed a district judge to rule on Assange's extradition case, but remains the supervising legal figure in the process. According to the UK courts service, the chief magistrate is 'responsible for… supporting and guiding district judge colleagues.'"