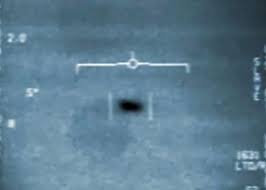 A US Navy veteran who served on the famous USS Nimitz has revealed how he once spotted a gigantic two-mile-wide UFO hovering over a military base.

The aircraft carrier became a household name in 2017 after incredible footage of a UFO being chased by fighter pilots from the ship was leaked online.

It sparked a huge number of US Navy pilots to come forward with their encounters, including Lee Adams.

Lee served as a supply officer on the USS Nimitz between 2012-2015, eight years after the infamous tic-tac incident.

And, while he never witnessed the UFO on that day off the coast San Diego, he did see perhaps an even more staggering "craft".

The veteran was stationed at a military base in Virginia Beach, Virginia, US, when a group of pilots spotted a mysterious plane flying over the area before disappearing into the trees.

Speaking to Mike and Maurice's Mind Escape podcast earlier this year, he said: "I look up and it's like a giant trash bag floating over the base.

"If you could imagine a trash bag that's two miles in diameter floating, translucent.