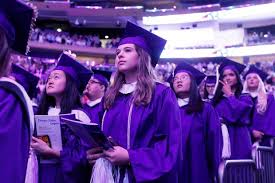 The Trump administration released the data last week, which offers the nation's most granular look into the finances of recent college graduates yet.

By looking at the median income versus the median debt of graduates from different schools and different levels of degrees, the data finally offers a tangible risk/reward for students considering a range of colleges and degrees. And some of the examples of the data are stunning, according to the Wall Street Journal.

For example, Bismarck State College can now say its business majors earned a median of $100,500 one year after graduating - higher than many elite business schools. And highlighting the amount of debt that students left college with also becomes and important part of the equation. Dentists leaving NYU's graduate program, for example, left school with a median of $387,660 in debt while earning just $69,600.

The data shows that graduates typically earned more in their first year than what they borrowed in total, but 15% of programs resulted in graduates carrying a debt load greater than their income. In 2% of instances, graduates owed more than twice their annual salaries.

The data was uploaded to a consumer website that was initially created by the Obama administration called the "College Scorecard". It offers data on more than 36,000 programs at about 4,400 colleges. The data allows consumers to compare programs and "defies years of efforts by the higher-education lobby to keep much of this information hidden."

The Collegiate War Against Men