> Stories from an SHTF Christmas: An Interview with Selco - Freedoms Phoenix 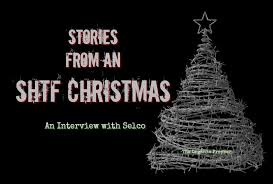 Today, we have a first-hand look at what a post-collapse holiday is really like. I interviewed my friend Selco and his answers are really food for thought.  I have learned more about long-term survival from Selco than probably anybody else and have based a lot of my own plans on things I've learned from him. For most of us who write about preparedness, it's research and theory. For Selco, it's real life.

This interview is in his own words.

I read over the answers to his questions at least a dozen times and thought about how fortunate we are. Even our most difficult times here, in our society, would have been the height of luxury during the war in Bosnia.

But will we always be this lucky?

First, give us a little bit of background. What was going on? Please describe the circumstances in Bosnia during this time.

War in the Balkan region (Slovenia, Croatia, Bosnia, Serbia…) started during the 1991 and went on until 2000 (if you include war at Kosovo and NATO bombing of Serbia in 1999), but historians mainly narrow it to a period of 1991-1995 if you do not count Kosovo war and NATO bombing.

NATO Flounders In The Middle East