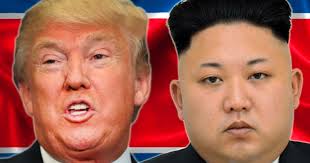 Trump also tweeted that North Korea "must denuclearize as promised," despite the communist nation's ominous assessment that talks are now over.

Trump said Kim signed a "strong Denuclearization Agreement" when the pair met in Singapore in 2018, although steps toward North Korea giving up its nuclear ambitions were never formalized.

On Saturday, North Korea said it conducted a "very important test" at its long-range projectile launch site on Saturday.

The test appears to be a ground-based test of a rocket engine to propel a satellite or an intercontinental ballistic missile (ICBM) into low Earth orbit.

The outcome of the test was said to be "successful" and will play a key part in changing North Korea's strategic position in the near future, the state-run Korean Central News Agency said in a statement Sunday, citing a spokesman at the Academy of the National Defense Science. It didn't elaborate or say what was tested.

GAO Calls Withholding of US Military Aid to Ukraine Unlawful: Does it Matter?

'Gulags Weren't That Bad': Sanders Staffer Says Trump Supporters Will Need To Be 'Re

NATO Flounders In The Middle East