> Survival 101: Focus on What Will IMMEDIATELY Kill You, NOT - Freedoms Phoenix 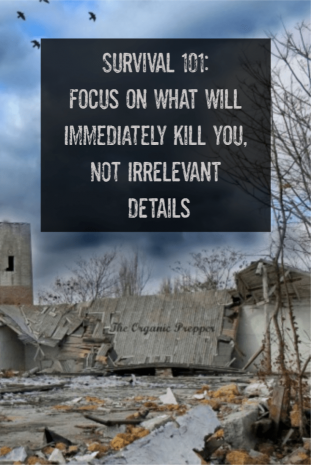 I've written about survivalism vs. preparedness before. Today I want to talk about a major difference between the two.

1. In one discipline, you can focus on the small details.

Preparedness is like getting a meal ready in the slow cooker. Survivalism is like the deep fryer. If you take to long to deal with things in a survival situation, you're going to get burned.

Something I see far too often is people who focus on preparedness confusing these two things. In a survival situation, there is no time at all to deal with irrelevant details. The speed at which you act can mean the difference between life and death. And I'm not talking about slow death by eating processed food. I'm talking about immediate death, injury, or peril.

I write an article about an extreme situation without appropriate sanitation and someone comments, "We don't use hand sanitizer or bleach. It's bad for you."

You know what else is bad for you? Sanitation-related illnesses like E.coli, cholera, dysentery, and campylobacter.

Or I write about building a fast kit for an extreme emergency when you're at a tourist attraction and I suggest peanut M&Ms. Someone says smugly, "That's not very organic."

When you're on the run for your very life, you're probably not going to care about a little bit of high-fructose corn syrup.

The same can be said for articles about using Narwhal tusks to defeat a terrorist or breaking down an event that may or may not be a false flag. While I appreciate guns, organic food, fancy hand cleansers made from essential oils, and discussing conspiracy theories as much as the next health-conscious, red-blooded American, I also know that there are situations in which getting bogged down in these irrelevant details could be deadly.

If you're caught up in a mass shooting, you won't suddenly be immune to bullets if you spontaneously realize, "Oh wait. This is a false flag organized by the government!" Those bullets are still flying around you no matter who is shooting them at you.

In a survival scenario, you have to work with the parameters you're given. When seconds count, fretting over the non-organic applesauce or the sunscreen with parabens is downright ridiculous. In survival situations, you have to focus on what will immediately kill you, not what might give you cancer in 30 years.

For the sake of survival…

Sure, in your day to day life you should make the best choices possible to support your health. You should eat whole foods that are free of pesticides and toxic additives. You should be a savvy consumer of media, thinking critically about what you're being told and not just soaking up the propaganda.

PPE for a Pandemic: A Guide to Personal Protective Equipment and Masks

Wuhan Coronavirus Hits the US: What Preppers Need to Know

Think the Government Will Save You? Puerto Ricans Find Warehouse FULL of Emergency Supplies Stashed