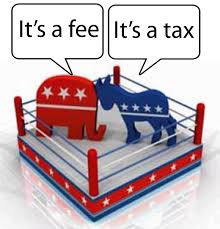 "Of all tyrannies, a tyranny sincerely exercised for the good of its victim may be the most oppressive. It may be better to live under robber barons than under omnipotent moral busybodies. The robber baron's cruelty may sometimes sleep, his cupidity may at some point be satiated, but those who torment us for our own good will torment us without end for they do so with the approval of their own conscience."—C.S. Lewis

"Taxman," the only song written by George Harrison to open one of the Beatles' albums (it featured on the band's 1966 Revolver album), is a snarling, biting, angry commentary on government greed and how little control "we the taxpayers" have over our lives and our money.

If you drive a car, I'll tax the street,

If you try to sit, I'll tax your seat.

If you get too cold I'll tax the heat,

If you take a walk, I'll tax your feet.

Don't ask me what I want it for

If you don't want to pay some more

When the Beatles finally started earning enough money from their music to place them in the top tax bracket, they found the British government only-too-eager to levy a supertax on them of more than 90%.

More than two centuries after our ancestors went to war over their abused property rights, we're once again being subjected to taxation without any real representation, all the while the government continues to do whatever it likes—levy taxes, rack up debt, spend outrageously and irresponsibly—with little concern for the plight of its citizens.

With every new tax, fine, fee and law adopted by our so-called representatives, the yoke around the neck of the average American seems to tighten just a little bit more.

Everywhere you go, everything you do, and every which way you look, we're getting swindled, cheated, conned, robbed, raided, pickpocketed, mugged, deceived, defrauded, double-crossed and fleeced by governmental and corporate shareholders of the American police state out to make a profit at taxpayer expense.

We have no real say in how the government runs, or how our taxpayer funds are used, and no real property rights, but that doesn't prevent the government from fleecing us at every turn.